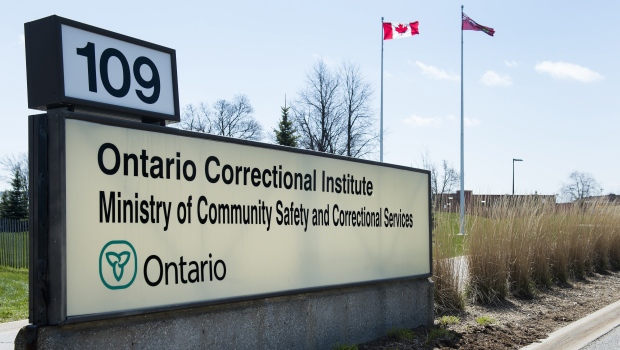 The Ontario Correctional Institute (OCI) where an outbreak of COVID-19 has infected inmates and staff in Brampton, Ont., on Monday, April 20, 2020. THE CANADIAN PRESS/Nathan Denette

Correctional officers in Ontario have resolved a weeks-long dispute with the government over permission to wear face masks inside provincial jails during the COVID-19 pandemic.

The Ontario Public Service Employees Union, which represents about 5,000 correctional workers, and the Ministry of the Solicitor General reached a deal Wednesday that makes it mandatory for all staff and visitors to wear surgical masks.

“In addition to providing staff with personal protective equipment as required, we continue to take further action to keep our staff and those in our custody safe,” said ministry spokeswoman Kristy Denette.

She said there will also be temperature checks for all staff and visitors at the institutions. Inmates are already checked upon admission and as needed, she said.

A spokesman for the union said staff will be issued one mask per shift.

“It's a big win and a big relief,” Chris Jackel said.

The novel coronavirus has made its way inside Ontario's jails, where inmates are either awaiting trials or are serving sentences of less than two years.

As of Wednesday night, 65 inmates had tested positive for COVID-19. A large outbreak at the Ontario Correctional Institute in Brampton, Ont., led to its temporary closure earlier this week.

All 109 inmates have been transferred to the Toronto South Detention Centre, a new jail that opened in 2013, the ministry said.

Denette said 62 of the inmates from the Brampton jail as well as 10 staff have tested positive for COVID-19.

Three inmates at Toronto South have and one other at Monteith Correctional Complex, near Timmins, Ont., have also tested positive for the disease. One staff member at Toronto South and another at Hamilton-Wentworth Detention Centre also have COVID-19.

Correctional staff at several jails across the province have refused to work in recent weeks in protest over not being allowed to wear protective gear such as masks.

In early April, guards refused to work at Monteith after they asked, but weren't allowed to wear the protective equipment when an inmate started showing symptoms of COVID-19, the union said. They were allowed to wear masks after that inmate tested positive for COVID-19 several days later.

The union said guards were finally allowed to wear masks at the Brampton jail once the Region of Peel public health unit declared a COVID-19 outbreak in that jail last week.

This report from The Canadian Press was first published on April 23, 2020.