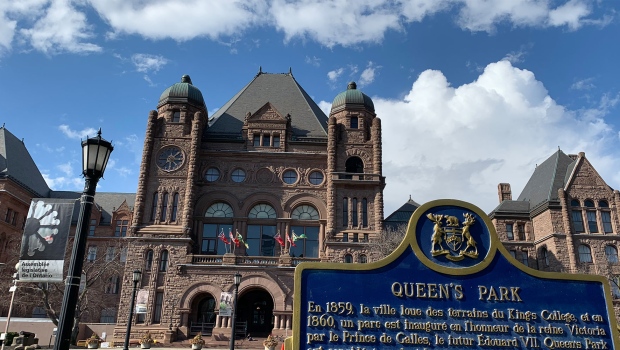 Legislators at Queen’s Park voted Tuesday evening to formally extend Ontario’s state of emergency through the end of this month as the province continues to grapple with the COVID-19 pandemic.

The vote followed close to seven hours of debate at Queen’s Park and came just before 8 p.m.

Ontario’s state of emergency would otherwise have expired on June 9, but the move extends it to June 30.

"Extending the provincial Declaration of Emergency will allow us to safely and gradually reopen the province, while we continue to use every resource at our disposal to battle this deadly virus," Premier Doug Ford said in a statement. "We are not out of the woods yet, so it is critical that we exercise caution to keep everyone safe, including protecting our most vulnerable citizens in long-term care homes, retirement homes and group homes."

The extension of the formal state of emergency means that the province’s emergency orders will remain in effect, including a ban on gatherings of five or more people and the closure of many businesses, including dine-in service at restaurants.

Other emergency orders that remain in effect include: allowing frontline care providers to redeploy staff where they are needed most, enabling public health units to redeploy or hire staff to support case management and contact tracing, limiting long-term care and retirement home staff to working at one home, and preventing unfair pricing of necessary goods.

Provincial health officials have declared Ontario to be past the peak of infection. However there have been a number of days where the province has seen an uptick in new cases, despite a general downward trend.

Overall there have now been 28,709 cases of the illness in the province, including a total of 2,293 deaths.

While more businesses have been allowed to open over the past few weeks, public health officials have stressed the importance of proceeding with caution to prevent another wave of infections.

The province has been in a state of emergency since March 17.

The state of emergency could be further extended at the end of June.