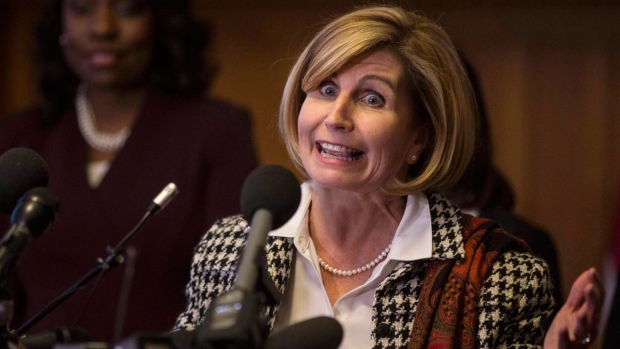 Nathalie Des Rosiers talks with the media, after joining the Ontario Cabinet as the new Minister of Natural Resources and Forestry, following a swearing-in ceremony following a Cabinet Shuffle at the Ontario Legislature in Toronto on Wednesday January 17, 2018. THE CANADIAN PRESS/Chris Young

TORONTO -- A Liberal member of Ontario's legislature says she will resign later this year.

Nathalie Des Rosiers says she was appointed the next principal of Massey College in Toronto and will step down as the provincial representative for Ottawa-Vanier at a later date.

Des Rosiers is a former dean of common law at the University of Ottawa and was first elected to the legislature in a 2016 byelection.

Her news comes just days after another Ontario Liberal, Marie-France Lalonde, announced she wants to run in the October federal election in the riding of Orleans that she now represents provincially.

Lalonde and Des Rosiers were two of just seven Liberals elected in last year's Ontario election in which the party went from a majority government to not having enough seats for official party status in the legislature.

Lalonde had been considering running for the Ontario Liberal leadership before her announcement, and Des Rosiers was also rumoured to have been mulling a bid.