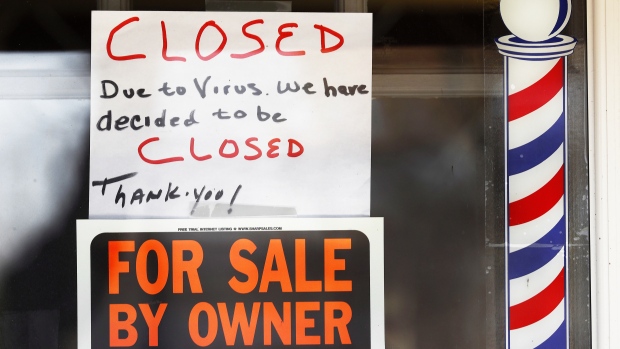 A closed sign is seen at a storefront during the COVID-19 pandemic. (The Canadian Press)

Ontario lost more than 153,000 jobs in the month of January, marking the first “notable decline” in employment since May 2020, the country’s national statistics agency said.

According to Statistics Canada’s latest Labour Force Survey, which was released on Friday, about 214,000 jobs were lost across the country—but the majority were centralized in two provinces, Ontario and Quebec.

The survey used Jan. 10 to Jan. 16 as a sample timeframe, about two weeks after the Ontario government implemented a provincewide lockdown that shuttered almost all non-essential businesses.

“Employment losses in January—highly concentrated in the Ontario and Quebec retail trade sectors—illustrate the continuing vulnerability of specific sectors and groups of workers to employment losses resulting directly from COVID-19 restrictions,” the survey said.

The unemployment rate in Ontario now stands at 10.2 per cent, which Statistics Canada says was “driven in part by an increase in the number of people on temporary layoff.”

Nearly all the jobs lost in the province were part-time positions.

Ontario’s January unemployment rate represents a 0.6 percentage point increase from the 9.6 per cent reported in December.

About 69,000 of the jobs lost in Ontario were in the Greater Toronto Area, Statistics Canada said, bringing the unemployment rate in the metropolitan area to 11.8 per cent.

The Labour Force Survey was released on the same day that sources told CTV News Toronto that the Ontario government is considering a gradual approach to reopening the economy and that the process could begin as soon as next week.

At the same time, sources say the government may extend the stay-at-home order across most of the province.

Ford's cabinet was urged by public health officials to extend the stay-at-home order for at least one more week – until Feb. 16 – across most of Ontario, sources said, while pushing it an additional two weeks – until Feb. 22 – in Toronto, Peel Region and York Region. Under the stay-at-home order, residents are required by law to not leave their places of residence except for essential reasons such as work, health-related business or grocery shopping.

When the stay-at-home order is lifted, COVID-19 rules and restrictions in each region will continue to be guided by the province’s colour-coded tiered lockdown framework.

"When that stay-at-home order ends, then the transition back into opening back the economy has to be really carefully done or our numbers could go up again exponentially especially with the U.K. variant," Health Minister Christine Elliott said.

"We don't want to have to go into another lockdown, another stay-at-home order."

“Small business owners and their employees have been devastated by closures, all the while their Big Box competition has held near-monopolies on the economy. Small businesses employed some 88 per cent of Ontarians before the pandemic. We can’t afford to lose them permanently,” Del Duca said.

“Small businesses in regions that aren’t ready to re-open will need support too. Doug Ford needs to begin spending the billions of dollars in unspent COVID-19 funding that he’s been hoarding, to support the entrepreneurs who won’t yet be able to re-open up shop.”