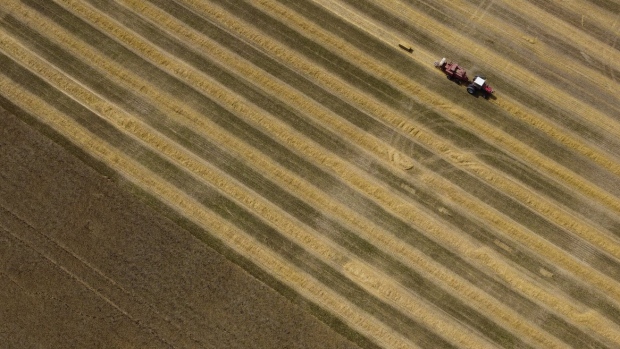 In this photo taken using a drone, a farmer crops a field in Mississippi Mills, Ont., on Tuesday, Aug 10, 2021. The Ontario Federation of Agriculture says the province is facing an alarming increase in the rate of farmland loss. THE CANADIAN PRESS/Sean Kilpatrick

TORONTO - The Ontario Federation of Agriculture (OFA) says the province is facing an increase in the rate of farmland loss as urban sprawl swallows up land previously used for growing.

The farmer-led organization called on municipal governments and the province Saturday to better protect farmland and food production when planning new developments to ease the housing crisis.

Data from the 2021 Census of Agriculture shows Ontario is losing 319 acres of farmland daily, equal to the loss of one average family farm per day.

That's a sharp increase from the last census in 2016, when the rate of farmland loss in the province was 175 acres per day. In Ontario alone, only five per cent of land mass comprises usable farmland.

“Most farmers would agree that's quite simply not sustainable,” said Mark Reusser, vice-president of the Ontario Federation of Agriculture.

If the province keeps losing farmable land to urban sprawl and new housing developments, he worries Ontario will have to rely on other countries for some food, making it more likely to be hit by global supply chain challenges.

Reusser, who raises turkeys on a farm near Kitchener, Ont., added that COVID-19 and the war in Ukraine have shown how easily supply chains can be disrupted and stressed the importance of independent Canadian food production.

“If we don't grow 1/8 food 3/8 here, we have to import it from somewhere else. Do we as a society want to be dependent on someone else for our food?”

Greg Fentie, who runs a dairy farm north of Springfield, Ont., said there's a direct correlation between each acre of farmland in the province and the amount of food supplied to Ontarians.

Less farmland could mean significantly fewer loaves of bread or bags of Doritos on store shelves.

“I'm a farmer, I'm not an urban planner...but I've got to think there's room in the cities to infill and to grow vertically,” said Fentie.

“Not everybody needs to have a subdivision house.”

“What we are saying is to build in the right places through long-term strategic land-use planning,” Brekveld said in a release.

Ontario has a “pretty good” planning history and process, said Reusser, but Minister's Zoning Orders (MZOs), which allow the government to expedite development and use land anywhere in the province, can be used to bypass processes intended to protect farmland.

The OFA would like to see government use of MZOs happen “very sparingly, only when absolutely necessary and, most of the time, within the urban envelope instead of in the countryside,” Reusser said.

Farmland itself is finite, but can be a perpetual resource for food, when treated well, he added.

“Corn, beans and squash have been produced here on Ontario soils for more than 1,000 years by Indigenous peoples.”