Ontario made the 'right call' in voting out Liberals, interim leader says 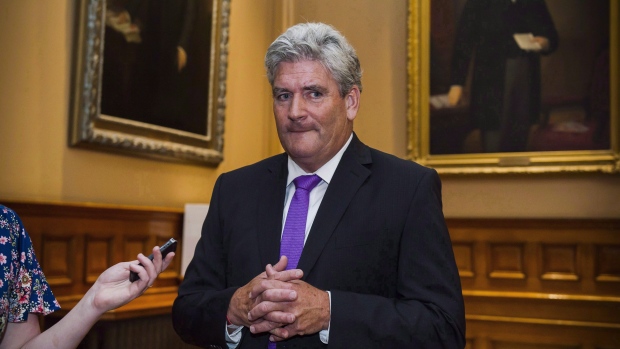 Interim Leader of the Ontario Liberal party John Fraser speaks to media after Ted Arnott was elected the new Speaker of the Ontario Legislative Assembly at Queen's Park, in Toronto on Wednesday, July 11, 2018. Fraser says voters made the right call in stripping them of power and official party status in the last provincial election. THE CANADIAN PRESS/Christopher Katsarov

TORONTO -- The interim leader of Ontario's struggling Liberals said Saturday that voters made the “right call” in stripping them of their power - and official party status - in the last provincial election.

John Fraser, who was one of only seven Liberals to win a seat in June's vote that gave Doug Ford's Progressive Conservatives a majority government, told the Ontario Liberal Provincial Council the party must acknowledge and learn from its mistakes.

“The truth is last June voters told us in pretty unequivocal terms, they'd had enough of us. That after 15 years, they wanted change,” Fraser said.

“They put us in the penalty box. Time will tell for how long. And, frankly, they made the right call.”

He said the party lost its message during the campaign, and in turn, lost the election. To regain it, he said he'd look to the party grassroots - and particularly the Ontario Young Liberals - for guidance.

“That's the foundation,” said Fraser. “That's where a lot of our energy and ideas and leadership has always come from. From young, bright, talented, motivated people with new ideas for a new era.”

He said he foresees more young people being driven to the Liberals by what he characterizes as the “chaos” brought on by Ford's Tories.

He also pointed to the Liberals' history of coming back from adversity, noting that Dalton McGuinty rebuilt the party “riding by riding, meeting by meeting, dollar by dollar” in the 1990s, with a team of volunteers “driving across this province.”

After his speech, Fraser highlighted that the “dollar by dollar” aspect will be particularly important, noting this year's campaign put the party more than $9 million in debt.

University of Toronto political science and international affairs professor Robert Bothwell said the party's debt will be a “problem,” but that fundraising will be possible.

“I think the Liberals are really going to have to rely on volunteers,” said Bothwell. “The paid help they've had before I think will be quite down.”

Bothwell said the bigger issue the Liberals face is reconnecting with supporters that the party had lost even before the election campaign.

He said the party's support base was already waning before Kathleen Wynne became premier in 2013, but Bothwell believes the Liberal's support “collapsed” during her leadership.

“I think the Liberals need to have real communication by conveying real ideas about real issues,” he said.

“That's not a bad basis for trying to rebuild, because it allows a party or any organization that has had a blow to realistically confront its problems.”

Nelson Wiseman, a politics professor also at U of T, said he doesn't believe the party's message will factor substantially in the Liberals' recovery.

He said he thinks more weight will be placed on who the new leader of the party is.

“In many respects what (Fraser) said is irrelevant. He's the interim leader. What's going to count is what the new leader does,” said Wiseman. “John Fraser is simply a placeholder.”

Wiseman said he believes the “Liberal brand” and the federal Liberals being in power may help the provincial party recover.

“The last election was about getting rid of Wynne and the Liberals,” said Wiseman. “An election is generally a referendum on the government. It's not on the Opposition party's messages.”