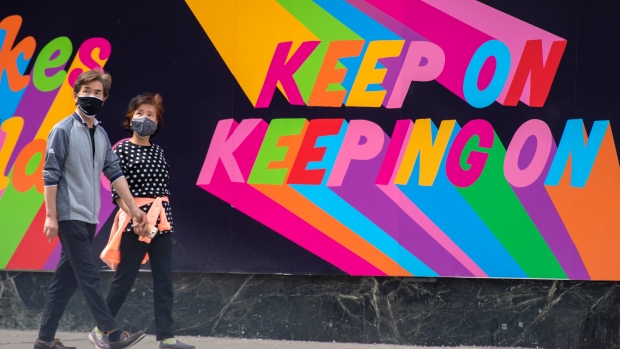 A couple walk past an inspirational mural in Toronto during the COVID-19 pandemic on Tuesday May 25, 2021. THE CANADIAN PRESS/Frank Gunn

The Ontario government is considering moving forward with a further loosening of COVID-19 restrictions and a plan could be announced as early as this week.

They said cabinet ministers are expected to consider the new proposal this week and that the government is considering making the announcement this Friday, and implementing the plan as early as next Monday.

An exit from Step 3 of Ontario’s “Roadmap to Reopen” would lift most health restrictions and could include removing capacity limits in all sectors, removing limits for social gatherings and organized public events and removing requirements such as active screening of patrons and workers. However at least some measures are expected to remain, such as masking and collecting contact information from patrons at restaurants.

While modelling released several weeks ago predicted that Ontario could potentially see thousands of daily new COVID-19 infections by late October in a worst-case scenario, the numbers have instead trended downward over the past few weeks.

Health officials have credited strong vaccine uptake and a cautious approach to lifting restrictions, but have warned that Ontario’s success is "fragile" and that further reopening should not be rushed.

That led provincial officials to hold off further reopening late in the summer. But Ontario’s current situation is a far cry from that worst case scenario, with the seven-day average now sitting at 500. The province reported just 306 new infections on Wednesday, the lowest daily number since Aug. 5.

“Several months ago, our government made the decision to pause the province’s exit from the Roadmap to Reopen. We’ve used that time to significantly increase vaccine coverage for both first and second doses,” Ontario’s Ministry of Health said in a statement to CTV News Toronto. “As a result, Ontario continues to report one of the lowest rates of active cases in the country, well below the national average, with public health and health care indicators remaining stable or improving.

“We’re now able to look at what public health measures we may be able to lift while maintaining our cautious approach.”

“I know the province is working on it and I have spoken to the premier about it,” Mayor John Tory said of potentially easing capacity restrictions on restaurants.

De Villa said that there are “active discussions” taking place at the provincial level about a further possible easing of restrictions and that health officials will be closely watching the outcome of gatherings from over the Thanksgiving weekend, when many people likely gathered together indoors.

“Let's see how things go with Thanksgiving numbers, you know what sort of impact are we going to see as a result of the Thanksgiving long weekend, but I know that there's active discussion happening there because we all want to get to life a little bit more like it was before the pandemic hit,” de Villa said.

The Ford government last week eliminated the capacity limits at large venues such as stadiums and movie theatres. That allowed the Maple Leafs to welcome close to 20,000 fans to Scotiabank Arena for their home opener against the Montreal Canadiens Wednesday night.

However the loosening of restrictions for large sporting events has left a bad taste in the mouths of Ontario’s restauranteurs, who have expressed outrage that they still have to adhere to tighter capacity limits.

Restaurants are currently required to limit capacity to as many people as physical distancing allows.