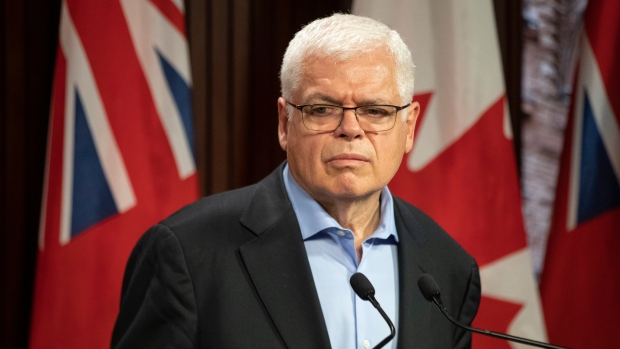 The Ontario NDP's newly minted interim leader wasted no time lashing out at the ruling PC government Wednesday, slamming them for almost doubling the number of parliamentary assistants who will receive pay bumps as part of their duties.

“It’s shocking that Doug Ford is inviting MPPs to climb aboard his gravy train two at a time — doubling up on parliamentary assistants on several portfolios and giving dozens of Conservatives a big pay bump,” Ontario NDP Interim Leader Peter Tabuns said in a release.

Tabuns was just named interim leader by his party Tuesday night and tasked with leading it until a permanent replacement is found for Andrea Horwath, who stepped down following the NDP’s latest electoral loss earlier this month.

The NDP also pointed out that Ford has added nine more cabinet positions since 2018 for a total of 30 ministers currently. The extra pay for cabinet ministers is close to $50,000 per year.

In its release, Ford's office said the parliamentary assistants will support cabinet in “delivering the government’s ambitious plan to build Ontario.”

“Parliamentary assistants support ministers with legislative and committee matters, including special projects and assignments that require dedicated leadership,” the release said.  “They also play a key role in building relationships and communicating government initiatives across the province.”

The latest appointments mean nearly everyone in Ford’s caucus – 73 out of 83 MPPs – will have positions which garner additional pay.

A number of other positions such as speaker and deputy speaker also carry additional pay and have not yet been filled.