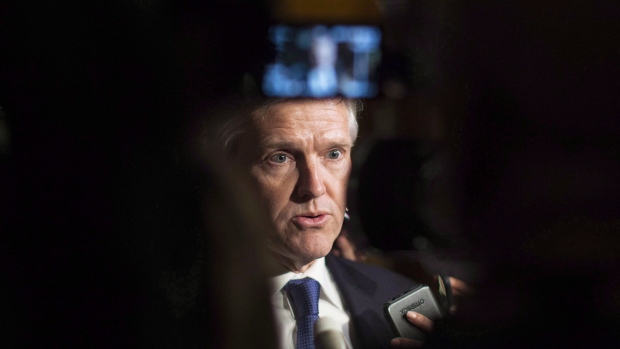 Ontario Environment Minister Rod Phillips talks with the media after Question Period at the Ontario Legislature in Toronto on Thursday, August 2, 2018. The Ontario government says it has taken the next step in its legal challenge against the federal government's carbon tax plan. THE CANADIAN PRESS/Chris Young

TORONTO -- Days after denouncing a Toronto judge who deemed a provincial law violated charter rights, the Ontario government said it would invoke the Constitution in its legal challenge against the federal government's carbon pricing plan.

In a court document filed Friday, the province outlined its arguments to contest the planned federal charge for provinces that don't have their own carbon pricing regime, a measure scheduled to kick in next year.

Ontario argues the federal government does not have the power to put a price on greenhouse gases because provinces are able to regulate them themselves.

"The regulation of greenhouse gases does not become a matter of 'national concern' just because different provinces take different views as to the most effective method to regulate them," the document says. "The provinces are able to decide how best to regulate greenhouse gas emissions themselves without any need for a one-size-fits-all federal carbon price."

The province also alleges the charges imposed under the federal plan are unconstitutional taxes because the legislation does not require the funds to be used for the reduction of greenhouse gas emissions.

Critics were quick to call the province's arguments to the court ironic in light of Premier Doug Ford's insistence that judges should not interfere with the actions of an elected government.

The premier made the comments repeatedly earlier this week after a Toronto judge ruled against the province in a separate case. In that matter, the judge struck down provincial legislation to reduce the size of Toronto's city council in the middle of an election campaign, saying it violated the constitutional rights of candidates and voters.

The province is appealing the ruling, and also took the unprecedented step of overriding it by invoking a rare constitutional provision known as the notwithstanding clause. The move set off a wave of outrage from critics who have said the clause was not designed to deal with such an issue.

Liberal legislator Nathalie Des Rosiers, a former counsel for the Canadian Civil Liberties Association, said the irony of the provincial lawsuit "is not lost on anyone."

"Certainly I think they are asking for lots of creativity on the part of the judiciary in their lawsuit against the federal government," she said.

That sentiment was echoed by Green party leader Mike Schreiner, who said the premier "talks out of both sides of his mouth."

"The irony is appalling, actually," Schreiner said. "The premier on the one hand attacks the judiciary and now is actually trying to use the judiciary to overturn legislation that was democratically passed by the federal government."

Environment Minister Rod Phillips said the government was within its rights to use legal channels to push back against the federal plan.

"We're properly using the tools in our toolkit," he told reporters.

The Progressive Conservative election platform set aside $30 million for the lawsuit over the carbon tax.

The federal government has said it is disappointed Ontario was spending millions of taxpayer dollars to fight climate leadership.

Ford vowed during the spring election campaign to eliminate Ontario's cap-and-trade system and fight the federal carbon-pricing system that would replace it.

The Progressive Conservative government has since passed a regulation and introduced legislation to scrap cap and trade and cancel programs financed through its revenues, which include rebates for energy-efficient renovations, transit projects and a fund for school repairs.

The group says it is still proceeding with the suit -- one of several legal battles the province is waging.