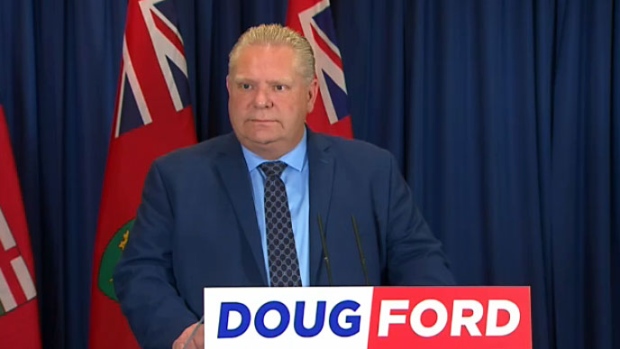 The Ontario PC Party’s lead over the Liberals and the NDP has narrowed but the Tories are still starting out as the obvious frontrunners, according to a new poll released Monday.

About 21.3 per cent of decided and leaning respondents said they would vote for the NDP, a figure which is three per cent higher than the last poll.

The Green Party has about four per cent of the vote, the poll says.

“We are not surprised to see the PCs come down in support from our previous poll. They have surrendered their lead in Toronto to the Liberals, but there is no doubt that the PCs will be starting the campaign as the frontrunners,” Quito Maggi, the president and CEO of Mainstreet Research, said in a written statement accompanying the poll.

“The NDP and the Liberals can take some solace that they have made up ground on the PCs, but they will need the PC vote to collapse in order to catch up. The PCs have large leads in every region in Ontario except Toronto.”

Mainstreet said it is the first time this year that it has seen the NDP take more than 20 per cent of the vote.

“These numbers are good news for the NDP and may be showing signs of momentum for the NDP. However, if this increase continues, the progressive vote will split and further help the Conservatives win the election,” Maggi said.

“Voters seem to be angry with the Liberals and they are now opting to vote for the PCs just because they are not the Liberals. People are still ambivalent about Ford, but we are seeing signs of significant voter volatility that could turn into shifts in voter support come election day.”

The poll has a margin of error of plus or minus three per cent, 19 times out of 20.