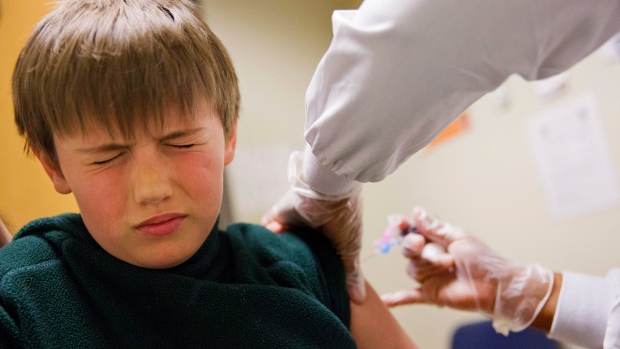 Ontario’s pediatricians are calling for a province-wide strategy for immunizing more young kids against the flu as the province prepares to deal with flu season and a rising tide of COVID-19 infections at once.

In an online petition by the pediatrics section of the Ontario Medical Association, the doctors say a number of steps are needed so that flu season does not compound the uptick in COVID-19 cases expected this fall and winter.

The petition points out that more than 1,000 children are hospitalized with influenza every flu season in Canada.

“COVID19 remains a growing and unpredictable threat.  Not only do we want to prevent our children from getting sick with the flu, we also must prevent them from making others around them sick,” the petition states.

The doctors say that several factors will make it more challenging to administer the vaccine to kids this season, including unprecedented interest among parents for the flu vaccine, COVID-19 and flu co-circulating in the community, and a decreased capacity to administer vaccinations due to health guidelines and limited resources in place because of the pandemic.

“Right now, Public Health seems to expect the status quo from years past, when individual doctor’s offices and scattered flu clinics gave flu vaccines,” the petition states. “But this year, there is a dramatically decreased capacity to administer flu vaccines in these settings.”

In order to significantly reduce the circulation of influenza among children this season, the doctors say the province needs to see uptake of the flu vaccine rise significantly above the usual 30 to 35% of the population.

To meet that goal, they are calling on the Ontario government to create a province-wide strategy for immunizing kids, especially those aged six months to four years of age who normally get their flu vaccine from their doctor.

The doctors point out that there is some urgency to the task as it usually takes the vaccine two weeks to build immunity in those who receive it.

In a statement in late August, the Ontario Medical Association urged parents to make sure their kids were up to date with their vaccinations. The OMA said then that doctors had seen “a dramatic decrease” in the number of parents bringing their children for routine vaccinations, in part because they didn’t realize they could during the pandemic.

The OMA told CP24 Monday that it is engaged in ongoing discussions with the provincial government about vaccinations and a host of other issues.

In an interview with CP24.com, OMA President Dr. Samantha Hill said she expects to see a plan around flu vaccination from the province shortly, but in the meantime the uncertainty is an added source of stress for doctors.

“I think everyone, including the government is pretty aligned on the fact that this year is a special year when it comes to the flu. We're all on the same wavelength, that it's going to be essential to get as many people vaccinated as possible, and especially to make sure the most vulnerable are vaccinated appropriately,” Hill said. “The challenges with that, of course this year, are numerous compared to the normal, numerous challenges.”

Hill said that while the medical system is being stretched to its limits, all stakeholders should be able to agree on and work together to make sure that more people get vaccinated this year than in previous years.

She said that while health care professionals want to be there for their patients and communities, the system “quite frankly, is stretched to the max.”

Hill said the flu vaccine normally becomes available in mid-October and doctors would like to know in advance how the province will ensure greater uptake of vaccination this year.

She said a number of ideas have been floated this year to expand vaccinations, including mobile clinics, parking lot vaccination centres, greater use of pharmacies, as well as private clinics.

“The concern is about making sure that this is done in a way that best utilizes the resources available, and covers as much of the population as possible,” Hill said. “Like I said, if there was ever a year this is the year where you want to have your best uptake.”

She stressed that in addition to vaccinations, other infection-prevention measures such as distancing, hand-washing and mask-wearing will also reduce the spread of infection if practiced widely.