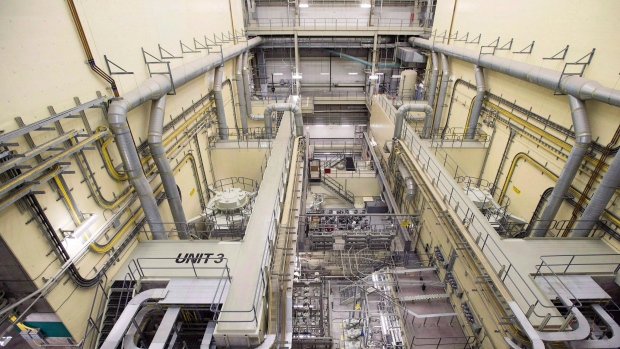 Ontario is powering ahead with plans for Canada’s first grid-scale reactor of its kind, as the province tries to keep up with rising electricity demand using low-emission power sources.

“This Small Modular Reactor that we are going to be building on site here could power a city like London and many others,” Ontario Energy Minister Todd Smith said at a news conference in Clarington, Ont where the new reactor will be built close to the current four CANDU reactors at the Darlington Nuclear Generation Station.

The 300-megawatt output of the new reactor, billed as a clean-energy source by the minister as well as “safe and flexible, and reliable,” is much less than the older CANDU reactors, but can be scaled.

“It builds a very flexible resource where if you build multiple copies of it you can shape the power to the load much more easily,” said Jeff Lyash, president and CEO of Tennessee Valley Authority, which has partnered with Ontario Power Generation to fund development on the modular reactors.

Currently about 60 per cent of Ontario’s daily power usage comes from nuclear plants, but demand is growing.

As older nuclear plants near retirement age, the Independent Electricity System Operator has said natural gas will be needed in the coming years or there would be rolling blackouts across the provincial grid and higher electricity bills by 2030.

Minister Smith maintains nuclear power will be the “backbone” of Ontario electricity in years to come as the province looks to reach net-zero when it comes to greenhouse gas emissions by 2050.

Another hurdle is labour. The Ontario government has estimated there will be a skilled trade shortage of 350,000 people by 2025.

“It is something we’re working very closely with the province in a variety different areas into the trade,” said Ontario Power Generation President Ken Hartwick.

The new Darlington plant, planned to be completed by the end of the decade, would employ 200 people during operations, as well as 2,300 jobs during planning and development, according to a 2020 study by the Conference board of Canada.