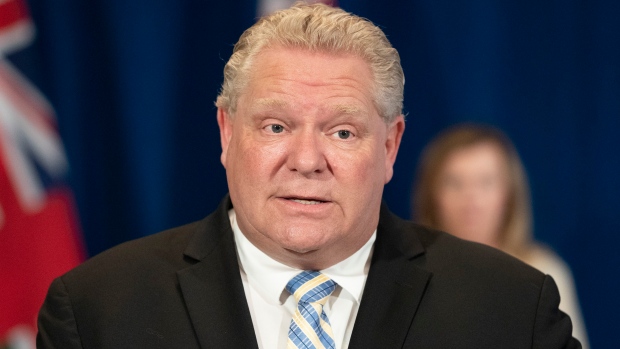 Ontario Premier Doug Ford answers questions a the daily briefing at Queen's Park in Toronto on Friday, May 15, 2020. THE CANADIAN PRESS/Frank Gunn

Ontario Premier Doug Ford said Friday that people can expect an announcement about schools and child care after the long weekend.

The premier made the announcement in response to a question about how, as more workplaces reopen, parents and guardians will be able to get back on the job without child care arrangements.

“The number one priority I always believe is your family. Family comes first,” Ford said before mentioning Lecce’s forthcoming announcement.

The province announced Thursday that a host of indoor and outdoor services will be able to resume on Tuesday, May 19, including nanny and babysitter services.

The premier said that as those services resume, the province will continue to stress key infection-prevention measures such as frequent handwashing, social distancing, and using a mask in situations where it’s difficult to maintain distance.

“We’ve come so, so far and we’re gonna continue moving hopefully in this direction,” Ford said.

With about a month left in the school year, many people have speculated that classes at physical schools will not resume this term, but the province has not said so definitively.