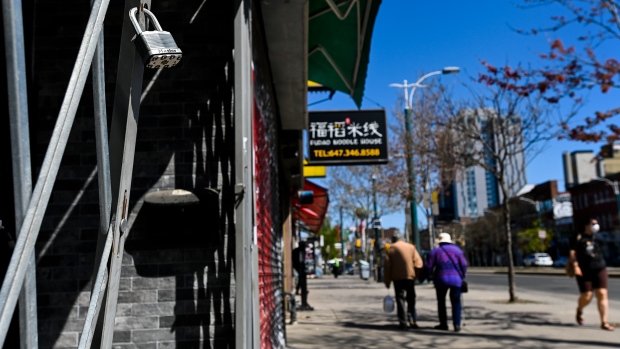 People walk past businesses on Spadina Avenue in Chinatown in Toronto on Thursday, May 13, 2021. Ontario Premier Doug Ford says public health measures are driving down COVID-19 cases, but they need to be maintained a few weeks longer so that the province can return to some semblance of normal this summer. THE CANADIAN PRESS/Nathan Denette

The province reported 1,616 cases on Tuesday, more than 500 fewer than each day of the previous weekend.

A province-wide state of emergency was declared about two weeks after that day, along with a stay-at-home order that remains in place today and will not end until June 2.

Of the 17 deaths reported today, one involved a resident of the long-term care system.

Provincial labs processed 22,915 tests in the previous 24 hours, with another 20,325 under investigation, generating a positivity rate of at least 7.6 per cent.

The lower case numbers will eventually have a positive effect on hospitals across the province, but the decline in occupancy has been slow to date.

There were 1,484 people receiving treatment for COVID-19 symptoms across Ontario on Tuesday, down from 1,546 at the end of last week.

Five-hundred and fifty-nine people were breathing with the help of a ventilator.

The Ministry of Health said 109,032 COVID-19 vaccine doses were administered on Monday up until 8 p.m.

A total of 7.286 million doses of vaccine have now been administered and 442,102 people have received a full two-dose inoculation.

'We want to get to stage one:’ Ontario premier floats idea of entering reopening plan ahead of schedule