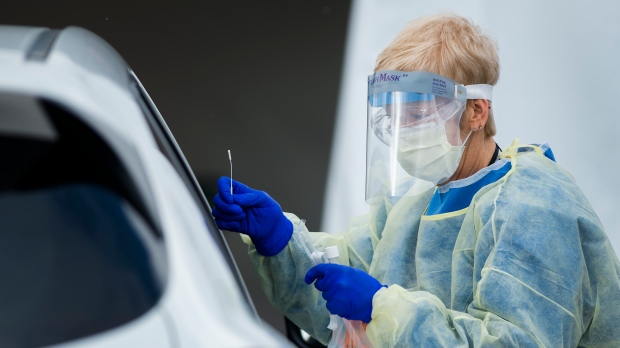 Healthcare workers do testing at a drive-thru COVID-19 assessment centre at the Etobicoke General Hospital in Toronto on Tuesday, April 21, 2020. THE CANADIAN PRESS/Nathan Denette

Ontario reported 1,708 new cases of COVID-19 on Sunday and 24 new deaths, as hospitalizations broke the 600-mark for the first time since the start of the second wave of the pandemic in September.

“Locally, there are 503 new cases in Peel, 463 in Toronto and 185 in York Region,” Health Minister Christine Elliott wrote on Twitter.

Provincial labs processed nearly 54,000 specimens in the past 24 hours, the third day in a row more than 50,000 results were processed.

Sunday’s tests generated a positivity rate of 3.7 per cent, higher than Saturday’s 3.4 per cent and the same as on Friday.

There are now 13,779 active cases of novel coronavirus infection in Ontario, up from 12,918 one week ago.

A total of 3,648 people have died of infection since early March, and 97,319 people have recovered from illness.

One-hundred and sixty-two people have died of infection in the past week.

Seven of the 24 people who died on Sunday were residents of the long-term care system.

The province said 586 people were in hospital due to COVID-19 symptoms on Sunday, down 11 from Saturday, but could not provide a breakdown of intensive care and ventilated patients.

A count of data from local public health units and hospital networks found 601 people in hospital for treatment of COVID-19 symptoms on Sunday, the highest number found since the start of the second wave.