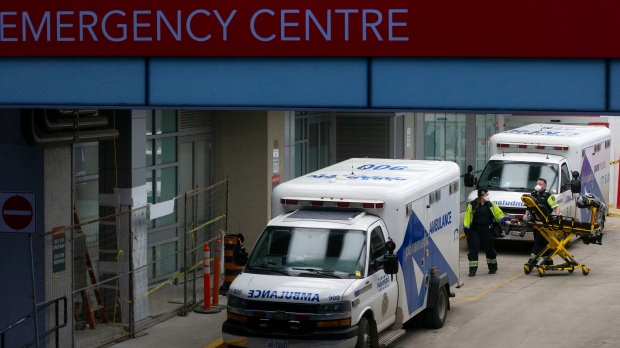 Paramedics push a gurney towards an ambulance outside a Toronto Hospital on Wednesday, January 5, 2022.THE CANADIAN PRESS/Chris Young

The province reported 11 more COVID-19-related deaths and a day-over-day drop in both hospitalizations and ICU occupancy on Saturday.

The Ministry of Health says the deaths occurred in the past month and one of the deaths was a long-term care home resident.

Since March 2020, the province has confirmed 13,063 virus-related fatalities.

The province confirmed another 1,575 cases today but health officials say daily case counts continue to be an underestimate due to limited access to PCR testing.

Among the latest cases, 1,061 of the individuals have received three doses of a vaccine, 271 have received two doses, 165 are partially or unvaccinated and 78 have an unknown vaccination status.