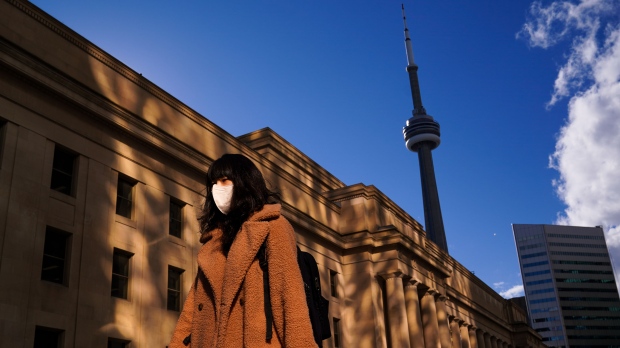 A woman wearing a face mask to help curb the spread of COVID-19 walks along Front Street in Toronto on Monday, November 1, 2021. THE CANADIAN PRESS/Evan Buhler

Ontario is reporting more than 13,500 new COVID-19 cases as the government announced that the province will revert to Step Two of its reopening plan on Wednesday in response the highly contagious Omicron variant.

The province logged 13,578 new coronavirus cases today, down from 16,714 yesterday and from the record 18,445 infections reported on Saturday.

Due to the New Year holiday, vaccination status among the latest cases is not available today but will be on Tuesday, the Ministry of Health says.

Another 6,547 people recovered from the virus in the past 24 hours, resulting in 130,307 known active cases across the province.

The province reported six more deaths today which occured in the past month, raising the death toll to 10,229.

Data on testing and the positivity rate is also unavailable today.

Health Minister Christine Elliott tweeted that there are 1,232 people with the virus in hospitals across the province and 248 are in intensive care units.

However, Elliott cautioned that not all hospitals report on the weekends, which can result in an underestimation of hospitalizations.

The seven-day rolling average of virus-related patients in ICU is 210.

So far, over 90 per cent of Ontarians aged 12 years and older have received one dose of a COVID-19 vaccine and 88.2 per cent have received two doses.

To date, there have been 805,098 lab-confirmed coronavirus cases and 664,562 recoveries since the pandemic began two years ago.

The latest numbers come as Premier Doug Ford announced that the province is returning to Step Two of its reopening plan on Wednesday to combat the Omicron variant.

As of Wednesday, students will return to remote learning for at least two weeks, indoor dining, gyms and other facilities will be shuttered and capacity limits will be placed on most other settings until at least Jan. 26.