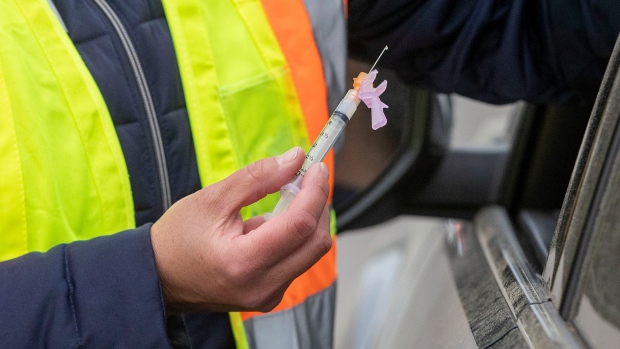 A syringe of Moderna COVID-19 vaccine is seen at a drive-thru clinic at Richardson Stadium in Kingston, Ont., on Friday, May 28, 2021. THE CANADIAN PRESS/Lars Hagberg

The seven-day rolling average of new cases now stands at 514, down from 533 yesterday.

There are now 5,601 known active cases of novel coronavirus infection across the province, the lowest this number has reached since Aug. 8, 2020, when there were 5,442 active cases.

One of the deaths reported on Sunday involved a resident of the long-term care system.

Outside of the GTA, two regions continue to see troubling spikes in cases. Porcupine Public Health, including the Timmins, Ont. area, reported 68 new cases on Sunday.

Its chief medical officer of health now says transmission has reached 300 cases per 100,000 inhabitants, more than seven times the rate of transmission in Toronto.

Porcupine has enacted its own modified reopening plan in response, which will continue to ban outdoor dining and construction activity deemed to be non-essential.

Meanwhile, Waterloo Region reported 97 cases on Sunday. Test positivity in that region is more than double the provincial average and the reproductive number is 1.2, despite much of the province being below 0.8.

Manitoba said Saturday 25 of its ICU COVID-19 patients are in Ontario hospitals.

Overall hospitalization data provided by the Ministry of Health on Sunday was incomplete.

Provincial labs processed 20,731 specimens, generating a positivity rate of at least 2.6 per cent.

Another 5,846 specimens remain under investigation.

The Ministry of Health still does not regularly disclose the total count of Delta B.1.617 variant of concern cases detected in the province, but Public Health Ontario said that as of June 3, 434 Delta cases were confirmed across the province through whole genomic sequencing.

It is believed the Delta variant will be the dominant strain in the province by July.