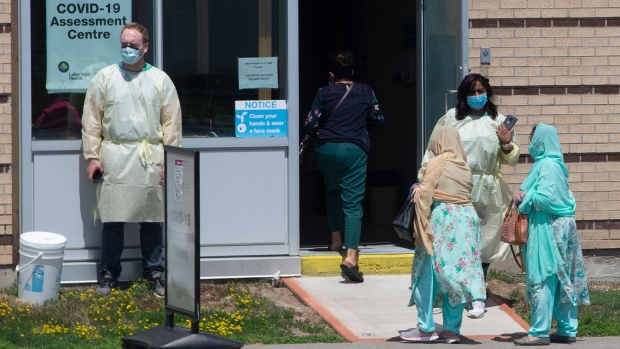 People attend a COVID testing centre at a Hospital in Ajax, Ont., on Tuesday July 28, 2020. THE CANADIAN PRESS/Chris Young

Ontario is reporting 548 new cases of COVID-19 on Tuesday, a drop from 615 new infections recorded a day earlier.

Seven more Ontarians have also died from the virus, up from five deaths reported on Monday. Two of these fatalities were long-term care home residents.

Today's death count is the highest since July 17 when nine deaths were recorded by the province.

The majority of new cases were recorded in the GTA, continuing a trend of increasing infections as the province is in the midst of a second wave of the virus.

“Locally, there are 201 new cases in Toronto, 90 in Peel, 62 in Ottawa and 56 in York Region. 61% of today’s cases are in people under the age of 40. Health Minister Christine Elliott tweeted on Tuesday morning.

According to Public Health Ontario’s daily epidemiological summary, Toronto now has the highest per capita rate of infection across the province with 628.3 cases per 100,000 residents. This surpasses Windsor Essex County’s rate - an area that saw an outbreak of cases among migrant workers over the summer - of 627.8.

The seven-day rolling average of new cases across the province now stands at 611.

The case positivity rate in Ontario on Tuesday was 1.3 per cent.

In long-term care homes across the province, 14 residents and nine health care workers tested positive for the virus on Tuesday.

The province also reported three new outbreaks of the virus among homes in the province on Tuesday, up from zero a day earlier.

A total of 2,987 Ontarians have now died from the novel coronavirus since the pandemic began.

The number of recoveries recorded on Tuesday remained relatively unchanged from a day earlier at 546. The number of active cases now stands at 5,469.

To date, there have been 55,362 cases of COVID-19 across the province and 46,906 Ontarians have recovered from the virus.

A total of 192 people are hospitalized with the virus across the province, up from 176 on Monday.

Officials say 41 of those patients are in an intensive care unit (ICU). Of those in ICU, 26 are breathing with the help of a ventilator.

According to public health officials, the testing backlog now stands at 55,483 specimens, more than 12,000 less than a day earlier.

More than 4.1 million tests have been completed in Ontario since the virus emerged in the province in late January.

In an effort to reduce the backlog, as of today COVID-19 assessment centres across the province are appointment-only and residents can no longer walk in to get tested.

Premier Doug Ford made this announcement last Friday stating that the move to appointment-based testing allows the sites to "make the necessary adjustments to winterize their operations."

However, as of Monday morning many of these sites were already fully booked for the beginning of the week as people rushed to book a time slot online.

On Tuesday morning, Scarborough Health Network tweeted that their website was experiencing technical difficulties “due to the high volume of visitors” and that they were working to resolve it.

Ford's government also confirmed on Tuesday that it is sending some COVID-19 tests to the U.S. for processing to help with the backlog at the province’s medical laboratories.

Although the province is coping with a second wave of the virus, infectious diseases specialist Dr. Isaac Bogoch told CP24 on Tuesday that he is optimistic that vaccines will start to roll out next year bringing Canadians back to a “path towards normalcy”.

“It’s pretty clear that these vaccine trials are motoring along,”Bogoch said. “All the snippets of data that we’ve seen along the way are very promising and I think we obviously can’t get over confident here but it looks like we will have successful vaccines and it looks like we will be able to roll these out in Canada.”