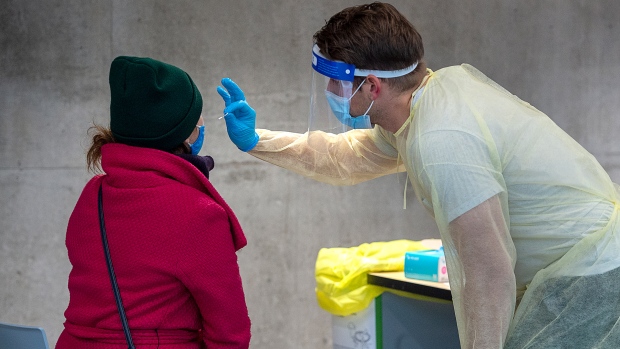 A swab is taken at a pop-up COVID-19 testing site on the Dalhousie University campus in Halifax on Wednesday, Nov. 25, 2020. THE CANADIAN PRESS/Andrew Vaughan

Ontario reported 715 new cases of COVID-19 on Sunday, along with 6 additional deaths, as the province’s known active caseload remained almost the same from Saturday.

The seven-day rolling average of new cases now stands at 709, down from 719 yesterday and 732 more than two weeks ago.

The province reported 821 new cases on Saturday and 795 on Friday.

Unvaccinated and partially vaccinated people made up 68 per cent of Sunday’s caseload despite comprising only 31 per cent of Ontario’s population.

Health Minister Christine Elliott said that as of Sunday, 85 per cent of people aged 12 and up had received at least one dose of a COVID-19 vaccine.

There are now 6,396 known active cases of COVID-19 across Ontario, up just one from Saturday, along with 9,653 deaths over the past 18 months.

Three of the six deaths reported Sunday involved residents of the long-term care system, and another death was disclosed as part of an ongoing investigation into excess deaths that have occurred during the pandemic.

The province has reported 37 deaths in the past week, as well as three deaths disclosed now from earlier in the pandemic.

Provincial labs 29,906 test specimens in the past 24 hours, generating a positivity rate of at least 2.3 per cent.

The Ministry of Health says there are 185 patients in hospital ICUs due to COVID-19, a decline of three from Saturday and seven from one week ago.

The province’s proof of COVID-19 vaccination certificate program comes in to effect for indoor dining at restaurants, gyms and cinemas in three days.