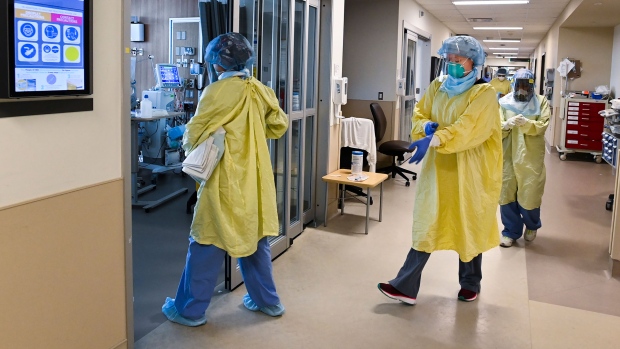 ICU health-care workers enter a negative pressure room to care for a COVID-19 patient on a ventilator in Toronto on Wednesday, December 9, 2020. THE CANADIAN PRESS/Nathan Denette

Ontario’s Ministry of Health says there are 865 patients with the virus in hospitals across the province, down from 1,116 a week ago.

On Saturday the ministry also confirmed 13 net new deaths with 12 occurring in the past month and one occurring more than a month ago.

Three of the latest deaths were long-term care home residents.

There have been 13,223 virus-related deaths in the province since March 2020.

Ontario labs processed 11,297 tests in the past 24 hours, producing a positivity rate of 8.5 per cent, compared to 8.9 per cent seven days ago, according to the ministry.

Among the latest cases, 657 of the individuals have received three doses of a COVID-19 vaccine, 192 have received two doses, 103 are partially or unvaccinated and 192 have an unknown vaccination status.

Yesterday 20,145 vaccine doses were administered across the province.