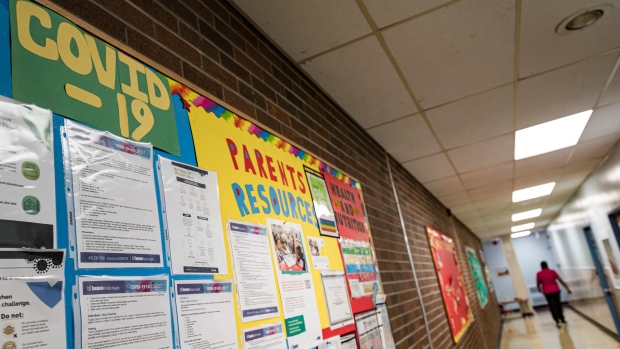 Ontario is reporting its lowest number of new school-related cases of COVID-19 in more than a month, as the number of lab-confirmed infections tied to classrooms continues to decline in lockstep with the reduction in cases in the broader community.

The Ministry of Education says that there were 80 new school-related cases confirmed over a 24-hour period ending on Thursday afternoon, including 69 involving students.

It is the lowest number reported in any single 24-hour period since Sept. 13.

The number of active cases associated with public schools now stands at 1,172, accounting for roughly one-third of Ontario’s active caseload.

That number previously peaked at 1,466 on Oct. 4 but has been steadily declining since then.

As of today three schools remain closed due to COVID-19 outbreaks, including Etobicoke’s Greenholme Junior Middle School which was switched to remote learning on Thursday night following the discovery of 10 cases.

At this point it remains unclear how many, if any, of those cases are the result of transmission within the school environment.

“We know that this is concerning when you hear your school is being dismissed entirely because of a COVID investigation but in this case it's to allow time for Toronto Public Health to investigate and really get that lab-confirmed data before they take any next steps,” TDSB spokesperson Ryan Bird told CP24 on Friday morning. “It (the closure) could last up to 10 days but it will vary depending on their investigation. That’s kind of the outer limit.”

The latest cases confirmed on Friday bring the total number of school-related infections confirmed since the beginning of the academic year to 3,596.

There are currently 677 Ontario schools with at least one active case of COVID-19, down from 696 one day prior.

According to Ontario Public Health, there are currently 14 people under the age of 19 hospitalized with COVID-19. That number had been as high as 22 last month.