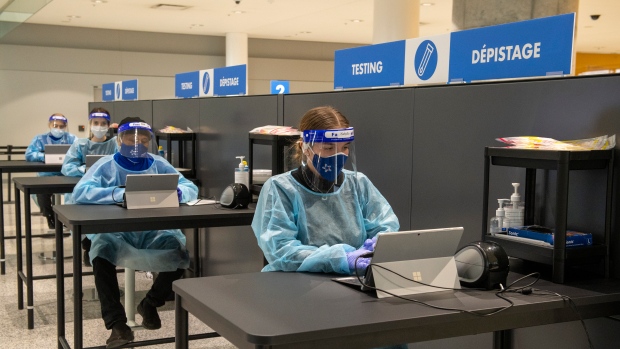 Workers prepare to greet passengers at the COVID-19 testing centre in the International Arrivals area at Pearson Airport in Toronto on Tuesday January 26, 2021. THE CANADIAN PRESS/Frank Gunn

Ontario is reporting its lowest positivity rate on PCR testing in more than two months, as well as a 13 per cent week-over-week decrease in COVID-19 hospitalizations.

The Ministry of Health says that 8.4 per cent of all samples processed by Ontario labs over the last 24 hours came back positive, which is the lowest that number has been since Feb. 22.

While officials have warned that the true number of daily infections is likely up to 10 times the lab-confirmed number of 775 due to the limited eligibility for PCR testing, the positivity rate nonetheless represents a positive signal as Ontario emerges from the sixth wave of the pandemic.

The pressure on Ontario’s healthcare system also continues to ease.

On Wednesday, the ministry reported that there are now 1,082 people hospitalized with COVID-19. That is an uptick from one day prior when many hospitals hadn’t reported occupancy data to the holiday weekend but is down approximately 13 per cent from this time last week.

The number of patients in the ICU is also declining but at a much slower rate. On Wednesday there were 160 people with COVID-19 in intensive care, down from 163 last week and 176 the week prior. The Ontario Science Advisory Table has estimated that at the current rate of decline the number of people in the ICU with COVID will take 259 days to be cut in half, resulting in some continued pressure for hospitals even as virus activity remains low.

“The numbers are coming down very nicely, at least in the province. Hospitalizations are coming down, wastewater surveillance is indicating we're at low levels (of virus activity) and things are continuing to decrease in most of the province. So, you know, it's actually a nice little interval where it's a bit safer,” infectious disease specialist Dr. Susy Hota told CP24 on Wednesday morning. “Mind you, there's still COVID out there, we're still seeing cases crop up.”

The sixth wave peak for hospitalizations was reached back on May 3 when 1,699 people with COVID-19 had been admitted to Ontario hospitals.

Since then most public health indicators have been trending downwards, though deaths as a lagging indicator have remained somewhat elevated.

On Wednesday, Ontario added another 11 net new deaths to its COVID-19 tally.

It has added 76 net new deaths to the tally since last week, bringing the total number of people who have died as a result of a COVID-19 infection to 13,175.

Wastewater surveillance, meanwhile, continues to point to a reduction in virus levels in most areas of the province. But preliminary estimates from the science table are showing a slight uptick in northern Ontario and the central east region of the province.

Hota told CP24 that given the current conditions in the province there is still a need for people to make their own personal risk assessments.

However, she said that the outlook for the summer appears positive.

“It's certainly better now than it was a month ago in terms of risk exposure,” she said.

According to the latest data, there are now 147 active outbreaks in long-term care homes, 90 in retirement homes and 51 in hospitals. Those numbers are all down between 17 and 35 per cent week-over-week.