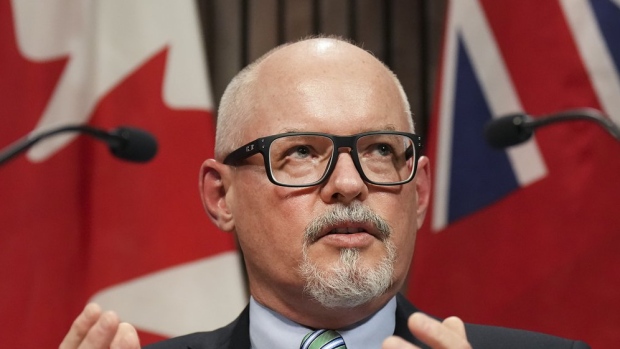 Dr. Kieran Moore, Ontario's Chief Medical Officer of Health, speaks at a press conference during the COVID-19 pandemic, at Queen’s Park in Toronto on Monday, April 11, 2022.  Ontario's top doctor says he and other health officials are planning for a new round of COVID-19 booster doses to be rolled out this fall. THE CANADIAN PRESS/Nathan Denette

Ontario's COVID-19 indicators are currently heading in the right direction but the province's top doctor is preparing for the fall, when trends will likely worsen, with plans including a new round of booster doses.

Chief Medical Officer of Health Dr. Kieran Moore said the preparations include scenarios for various stakeholders in the health system to go through, such as an "aggressive" flu season combined with a COVID-19 resurgence.

Ontario will be purchasing more than six million doses of flu vaccine, he said in an interview, and expects to offer further doses against COVID-19.

Third doses are currently available to people 12 and older, and fourth doses are available for people who are 60 and older or First Nation, Inuit and Metis adults as well as their adult household members. Immunocompromised people – such as transplant recipients – aged 60 and older and long-term care residents can get a fifth dose.

Moore anticipates that in the fall a new generation of vaccine will be available that targets both the original COVID strain plus a more up-to-date one that is circulating, such as Omicron.

"We're looking at distribution models through pharmacy, primary care, and your public health partners," he said.

"That would be something that could start as early as October. We'll start with the highest risk, so by age or by occupation, so health-care workers or those over 60, to offer it to them, and then based on the availability and demand expand further."

Dr. Fahad Razak, the scientific director of the province's COVID-19 advisory group, said more evidence is needed on benefits of fourth doses for a broader population.

"The evidence for that third dose is very clear," he said in an interview this week.

"The fourth dose is beneficial for high risk groups … but for the general public, an otherwise healthy 20 or 30 year old who has no risk factors, there really isn’t clear evidence yet to say, 'Go get that fourth dose.' It’s not clear. You’ll see some jurisdictions are allowing it, some are not, and that reflects the lack of clarity from the evidence right now."

Razak said while indicators are positive right now, Ontario is still in the sixth wave.

A combination of high vaccination rates and recent infections has given Ontario a strong "wall of immunity," but the fall will bring waning immunity as well as other respiratory viruses that have for two years been kept at bay due to COVID-19 public health measures, he said.

There is also the potential for a new variant.

"What we’ve seen in prior waves … is essentially a new wave, a new variant develops and kind of comes through the population roughly every six months," Razak said.

"Nobody knows whether it will continue, but if that pattern continues we hopefully have a good summer, but we head into a fall season with some risk."

If another wave of COVID-19 threatens the health system and its ability to deal with the surgical backlog, Moore said there is a possibility mask mandates may return "if it's really, absolutely required."

"Certainly any further public health measures beyond that, I don't think will ever be necessary, given the benefits of the vaccine that we've seen and given the effectiveness of masking at a population level," he said.

Provincial mask mandates for public transit and health-care settings will expire this weekend – though hospitals say they will keep requiring masks. The mandates remain in place in long-term care and retirement homes, and Moore recommends keeping those until at least the summer of 2023.

Meanwhile, Ontario announced Friday that it would move from daily to weekly COVID-19 data reporting and stop publishing details on the virus in long-term care and retirement homes as well as schools. As well, Verify Ontario, which was used to scan vaccine certificates, will be removed from the app store.

The province is also in the midst of preparing for the eventual approval of vaccines for children under five. An application from Moderna for a COVID-19 vaccine for children aged six months to five years old has been under review by Health Canada since late April.

It took Health Canada almost three months to authorize the Moderna vaccine for adolescents, and almost four months for children ages six to 11. Moore said the youngest children may not be able to be vaccinated until at least late summer.

"We've already had plans of how to distribute it through our primary care partners, as well as our pharmacy partners," he said.

"So we're ready. It's now just ensuring that the vaccine is safe, that it's effective, and that it will indeed, protect children fully. And I don't mind taking that extra time to ensure the data is correct."