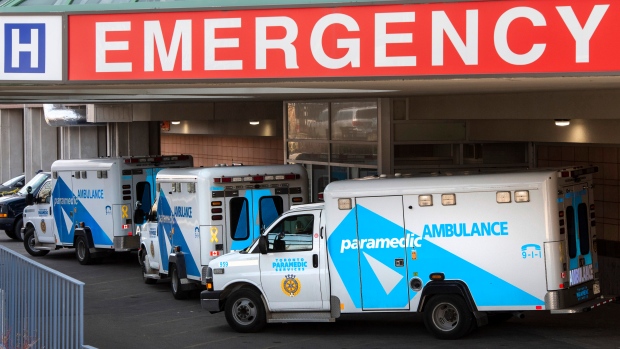 A hospital in southwestern Ontario says it has been forced to cancel several surgeries this week to create capacity as it deals with ongoing staff and inpatient bed shortages. A paramedic closes the doors on his ambulance at a hospital in Toronto on Tuesday, April 6, 2021. THE CANADIAN PRESS/Frank Gunn

TORONTO - Ontario doctors pushed lawmakers this week to create specialized non-profit clinics to tackle a massive surgical backlog that worsened during the pandemic.

The Ontario Medical Association said it would like to see “integrated ambulatory centres” affiliated with hospitals across the province to deal with the backlog that has grown to more than one million procedures.

“The stand-alone series of surgical centres are designed specifically to focus on one type of surgery at a time so that we could improve efficiency, more patients would get their procedures done, and it would be an improved experience for the health-care delivery team,” the association's president, Dr. Rose Zacharias, said in an interview.

The centres would focus on specific elective surgeries, such as replacing knees and hips, she said. They would operate within Ontario's publicly funded health-care system and would not contribute to a two-tier system, the medical association said.

Similar facilities in other regions have shown there are lower complication rates and fewer infections compared to procedures done in a standard operating room at a hospital, Zacharias said. Such centres exist in British Columbia and Alberta, and there are a few in Ontario as well, she said.

More than 100 doctors descended upon the legislature on Monday to suggest the surgical centres as one way to ease pressures on an overburdened health system.

Emergency departments temporarily closed for hours or days at a time in the summer and into the fall while children's hospitals have been cancelling surgeries to deal with a massive influx of patients with respiratory illnesses.

Elective surgeries, despite their name, remain important, she said.

“If they are not done, they render a patient to loss of function, increased mental health distress and burden and the whole ripple effect of not getting a knee replacement, for example,” Zacharias said.

There is a significant doctor and nurse shortage across Ontario, which is projected to get worse over time.

The centres would be staffed by hospital doctors and nurses who could use their time more efficiently, Zacharias said.

“Right now there are doctors and nurses that perform a variety of surgical procedures inside one operating room in a hospital and if we were to designate another surgical space for just knee replacements, for example, the docs and the nurses that would've otherwise maybe waited for a few hours to get that O.R. set up to do the surgery, would come to this space,” Zacharias said.

“And because it's a full day of knee replacements, it takes minutes to go from case to case.”

The new system would improve efficiency between 20 to 30 per cent, she said.

The Ontario Medical Association met with Health Minister Sylvia Jones on Monday to discuss the idea and several others.

The province is investing $300 million in 2022-23 as part of its “surgical recovery strategy” that will increase scheduled surgeries, procedures and diagnostic imaging services that were hit the hardest during the pandemic, Jensen said.

She also said the government was considering options for increasing surgical capacity by increasing the number of procedures performed at “independent health facilities,” but has provided no details since.

At a panel at the legislature on Monday, Dr. David Urbach, head of surgery at Women's College Hospital in Toronto, said hospitals could do common, low-risk surgeries much better.

He pointed to one surgical centre that the rest of the health-care system in Ontario can learn from: Shouldice Hospital. It is a private hospital that was grandfathered into the public health-care system and focuses on hernia surgeries.

The highly specialized centre creates “efficiencies that happen when a facility really focuses and creates excellence in one very specialized and unique type of care.”

Hospitals are susceptible to system shocks, Urbach said, pointing to hospitals across the province cancelling surgeries due to the pandemic. Scheduled elective surgeries are usually the first on the chopping block during those system shocks, he said.

“If you can create some sort of entity that's less susceptible to those types of system shocks and stresses what we can do then is preserve our ability to provide elective services regardless of what's going on in the rest of the system,” Urbach said.

“So we don't have to be so dependent on hospitals, which as we we've seen, are very vulnerable to these types of widespread system disturbances.”