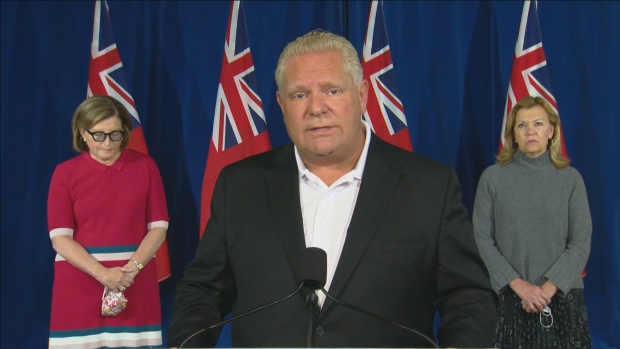 The Ford government will begin releasing part of its plan to counter a new surge in coronavirus cases across Ontario as soon as Tuesday, Premier Doug Ford and Health Minister Christine Elliott said Monday.

"We do have a complete and comprehensive fall preparedness plan that we will start bringing forward tomorrow for discussion," Elliott said.

She said part of the response involves processing 50,000 coronavirus tests per day, something Elliott said could occur in the next two weeks.

Provincial labs processed 40,000 tests in 24 hours for the first time since the pandemic began over the weekend.

She added that an enhanced influenza vaccination campaign and protecting scheduled surgeries from further cancellation will be key, as many were halted during April and May and cannot be postponed again.

Ford also hinted that as many as 60 pharmacies could be hosting coronavirus PCR testing by the end of the week.

On Saturday, Ford and officials moved to reduce limits on private gatherings across the province down to 10 indoors and 25 outdoors in response to the rising count of cases.

Elliott said this fall's influenza vaccination campaign will need to be even larger than last year's in order to prevent emergency rooms from being overwhelmed.

"We had a huge year last year – over 4.4 million Ontarians were vaccinated – but we want it even higher this year and that's for adults and children," she said, adding that pharmacists will be able to administer vaccines to everyone except very small children.

Ford said that there also is a need for more money from Ottawa as they ramp up efforts.

"We need Ottawa's support and we need it now," Ford said.

Ford defended his government's response to the spike, particularly making testing available, after case counts started to rise in September.

The chance of a spike was suggested even in late August, when reproductive rate calculations calculated by Public Health Ontario in regions across the province started to rise to worrying levels. 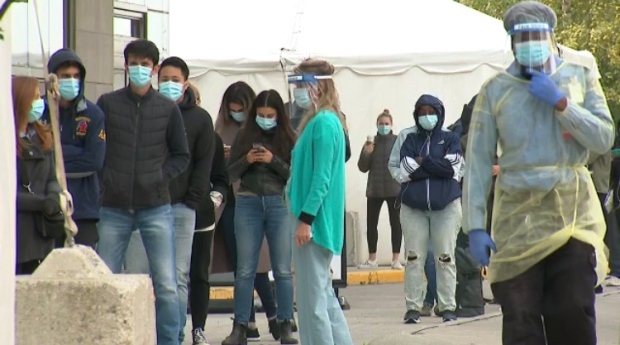 "We went from a Friday (with) under 100 cases ten days ago, and then all of the sudden bingo overnight, people were lining up, and I think that's great, and we reacted," Ford said. "And we ramped up testing in a massive way."

He said that Ontario reliably performs more PCR tests for coronavirus each day than all other provinces combined.