Ontario will embark upon a three-stage reopening plan tied to vaccination rates that could allow patio dining to resume and non-essential retail stores to reopen as early as June while potentially keeping gyms and movie theatres shuttered until later this summer.

Under the plan announced on Thursday afternoon the Ontario government will begin permitting outdoor gatherings of up to five people as of Saturday while also reopening most recreational amenities, including golf courses, so long as individuals maintain a distance of at least two metres from other people at all times.

The first stage of the larger reopening plan would then begin about two weeks after 60 per cent of eligible adults have received their first dose of COVID-19 vaccine. The Ford government has set June 14 as a target date for that stage to begin but Health Minister Christine Elliott acknowledged on Thursday that it is “possible” it could get underway earlier, given that 58.5 per cent of Ontario adults have already received their first dose.

The first stage will also allow day camps, campgrounds and provincial parks to reopen as well as outdoor pools and splash pads.

“The speed at which we get through this reopening will come down to one thing – how quickly we get people vaccinated – and we all have a part to play in that,” Premier Doug Ford said during a press conference Thursday afternoon. “If you haven’t received your vaccine yet please go and get it now and if you have please encourage a friend, a family member or a neighbour to get theirs. Because our daily vaccinate rate is the single biggest factor in our fight against COVID right now and it is how we can start to look forward to a great summer.” 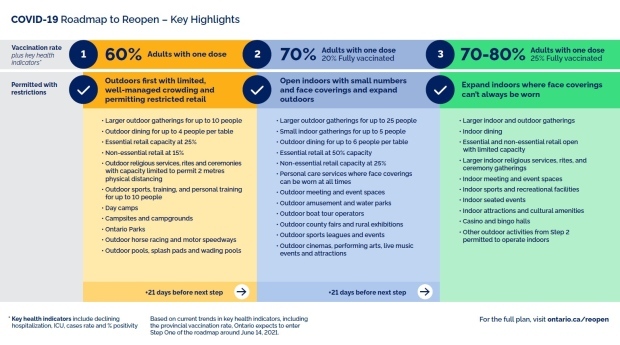 In the past the Ford government has taken a piecemeal approach to reopening in which it lifted restrictions on a region-by-region basis, often splitting up the Greater Toronto Area in the process.

This time it is scraping its colour-coded framework in favour of a provincewide reopening strategy that Ford said is designed to give people “certainty” and “take the guess work out of their daily lives.”

Under the plan, the second stage will begin at least 21 days after the first stage gets underway and will be tied to 70 per cent of Ontario adults having received at least one dose of COVID-19 vaccine and 20 per cent having been fully vaccinated.

It will allow personal care services, like barber shops and nail salons, to reopen and boost the capacity at non-essential retail stores to 25 per cent.

Virtually all outdoor activities will be allowed to resume in the second stage, meaning that amusement parks and water parks can reopen in time for the busy summer season and sports leagues can resume operations.

The third stage of the reopening plan represents a more full return to normal life but won’t occur until 70 to 80 per cent of adults have received at least one dose of COVID-19 vaccine and 25 per cent have been fully vaccinated.

That is when indoor dining will be allowed and indoor fitness and recreational facilities can reopen.

The reopening plan takes a decidedly more cautious approach than the one being pursued in Quebec, where officials have said that they will up to 2,500 people to attend events in large theatres and arenas as of May 28,

Quebec also plans to allow indoor dining to resume and gyms to reopen across most of the province on May 31, likely months ahead of Ontario.

“I know that there might be some people who want to move faster but we can’t risk it right now,” Ford said on Thursday. “Too much has been lost to do that right now. We are not done with this pandemic yet but we will get through this if we keep working together,”

The personal care services industry is not pleased with the plan. Kristen Gale, the chief executive officer of The Ten Spot beauty bars, said many people in the industry are struggling to make ends meet.

She said it is 'horrifying' how the government is handling the situation.

"I know that a lot of people in the industry have lost their businesses. They've been on food stamps. It's, it's really difficult because we're a bit of a gig economy. A lot of people are renting out their own chairs, and they aren't able to actually get support from the government," Gale said in an interview with CP24 Tonight.

"We just want to be treated fairly at this point and no other sector -- perhaps maybe fitness -- has been disadvantaged to this extent."

Peter Gosling, the owner of Glassbox Barbershop, said the announcement is disheartening and called the reopening plan not great.

He told CP24 Tonight that his barbershop is ready to reopen on June 2 when the stay-at-home order expires.

"If you continue to hold us back, there's going to be a major issue of people choosing to open up irresponsibly, and I don't want that to happen," Peter said, adding that why does the government get to pick and choose who can and cannot work.

"We need to be respected. We need to be…and I'm sorry, I'm probably a little bit emotional and a bit angry today after the initial decisions, but like, come on. This has gone a long time now. And I truly believe that hairdressers, barbers, service industry workers have actually gotten the brunt of probably a worst we've seen in any industry."

The reopening plan released on Thursday comes on the heel of new COVID-19 modelling which suggests that daily case counts will decline to 500 by July if restrictions are kept in place until mid-June. The modelling said that case counts would, however, continue to hover at around 1,000 throughout most of July if restrictions are lifted in lockstep with the stay-at-home order on June 2.

In a statement, the Canadian Federation of Independent Business said that Ontario’s cautious approach will ensure that the “province is the last jurisdiction in the continent to allow even a trickle of business activity to resume.”

The organization, which represents more than 110,000 small and midsize businesses, said it is “deeply disappointed” that there isn’t an “immediate reopening” of low-risk activities “like shopping at small retailers, visiting hair and nail salons, gyms, and patio dining at restaurants.”

The president and CEO of Cineplex also panned the plan in a statement, calling it “absurd” and accusing the Ford government of “ignoring the facts.”

“The science and evidence is literally on Ontario’s door step. We have been operating safely in Quebec since February,” Ellis Jacob said.

Canadian chef Mark McEwan, who owns several restaurants in the city, was not happy with the province's reopening plan, saying that Ontario has been in lockdown for too long.

"When the dust settles, it's going to be a very, very challenging frontier for everybody to navigate without question. All I want to do is get back to work. We have 400 people we want to bring back. They're very anxious to be back in the restaurants. And we just want to do what we do," McEwan said in an interview with CP24 Tonight.

The chief executive officer of Indigo bookstore said the reopening plan shows how the Ford government does not care about businesses in Ontario.

"We cannot understand why we are being totally muted by a couple of people, a couple of medical people who have never even had the respect to sit down with us to say, is there another way to sustain exactly what you want and what we want, which is totally healthy outcomes."

Ontario’s science table has said that there would be a “manageable” six to 11 per cent increase in transmission from reopening schools but Ford told reporters on Thursday that “we can’t afford” that right now.

“I think that parents are going to be worried about where the Premier’s priorities lie,” Horwath said. “We know that all along that schools could have been made safer by this government but Doug Ford didn’t want to spend the money on our kids.”

Ontario Premier Doug Ford holds a press conference regarding the plan for Ontario to open up at Queen's Park during the COVID-19 pandemic in Toronto May 20, 2021. THE CANADIAN PRESS/Nathan Denette