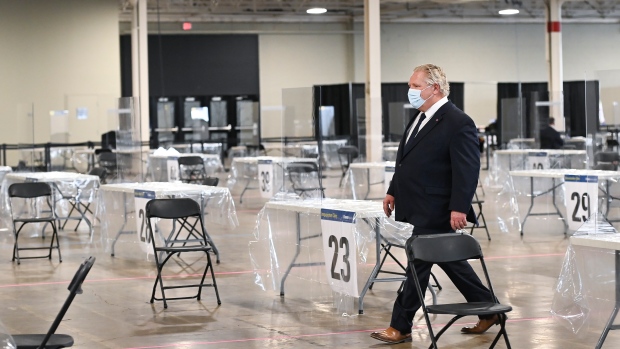 Ontario Premier Doug Ford arrives to delivery a message at a mass COVID-19 vaccination clinic during the COVID-19 pandemic in Toronto on Wednesday, March 10, 2021. THE CANADIAN PRESS/Nathan Denette

Ontario’s science table says its analysis used by the Ford government to determine hot spot postal codes was not meant to identify neighbourhoods that will be prioritized in the COVID-19 vaccine rollout.

The communications director for the advisory table said in a statement to CP24 Thursday evening that the postal codes were used in an analysis to look at the disparity between COVID-19 hot spots and other neighbourhoods.

“Our aim was to illustrate the need to target both age and neighbourhood in vaccine roll-out; not to list specific neighbourhoods for prioritization,” Robert Steiner said.

The analysis was included in the science table’s February report on mass vaccine distribution.

“The Science Advisory Table did not determine the actual (postal codes) that the government would ultimately prioritize in its vaccine strategy,” Steiner said.

On Thursday, the premier’s office accused both the Ontario NDP and Liberal parties of “spreading misinformation” and “politicizing the vaccine rollout” by calling into question the selection of hot spot postal codes that are being given priority access to COVID-19 vaccines.

In a statement, the premier’s office said as part of the postal code selection process, experts looked at hospitalization and outbreak data as well as testing rates and deaths during the second wave of the pandemic.

“For the past several days, the opposition has spread misinformation and dangerously politicized the province’s efforts to vaccinate 114 high-risk neighbourhoods. These hot spots were identified based on analysis conducted by the COVID-19 Science Advisory Table, which relied on Public Health Ontario data and were confirmed by the non-partisan vaccine task force,” the statement read.

Last week, the CBC published a story that analyzed data from various hot spot postal codes and found that some appeared to have been less impacted by COVID-19 than others that did not make the hot spot list.

The Ford government immediately denied any political interference, maintaining that the postal codes were selected by non-partisan experts.

Earlier this week, Ontario NDP Leader Andrea Horwath called on the province’s auditor general to look into how the postal codes were selected.

“One of the key sources of data was the analysis that was done with the number of cases, the number hospitalizations, and the illness burden related to the postal code where people lived,” said Huyer, who is a member of the province’s vaccine distribution task force.

He said the province also took into consideration where racialized populations live as they have been disproportionately affected by the pandemic.

“That work was done by a variety of people. But specifically, the science table did significant work to help to identify where are the areas of greater risk and why there was greater risk within those areas, and published and released information which was very valuable to the province to help them to decide which of those areas would be focused in the hot spots.”

One of the postal codes that has attracted particular attention is K2V, a Kanata postal code that the CBC said had a lower hospitalization and death rate than some 300 postal codes not designated as hot spots.

The Ford government has spent the past several days defending its hot spot selection amid calls from the opposition for greater transparency.

“Since January, the K2V postal code in Ottawa had 44 per cent more cases per 10,000 than the provincial average,” the premier’s office said.

“As well, this postal code saw 25 percent more COVID-19 deaths. These indicators were considered in addition to the fact that this postal code’s sociodemographic data from the most recent census shows a racialized community of over 40 per cent.”

Bonnie Lysyk, the province’s auditor general, has not yet said whether she will review the government’s hot spot postal code designations.