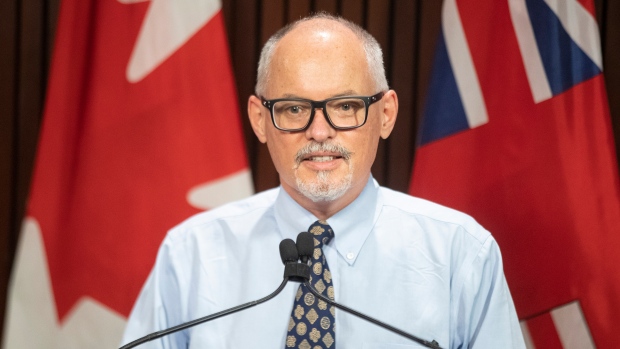 Ontario’s top public health official has released a statement reiterating his belief in the safety and efficacy of Pfizer’s pediatric vaccine after facing criticism over earlier remarks which appeared to question whether there was enough data to support mandating its use.

Chief Medical Officer of Health Dr. Kieran Moore was asked during a press conference on Wednesday about whether the province would consider making vaccination mandatory for public school students but he said that such a move was not being contemplated because it’s a “new vaccine” and the province needs “a greater experience with it before we’d ever mandate it.”

The remarks caused an immediate stir on social media with a number of epidemiologists and other public health experts suggesting it could feed vaccine hesitancy.

Liberal Leader Steven Del Duca also weighed in on the matter, posting a message to Twitter in which he said that Moore should “clarify his comments” or “go.”

“Millions of children have received the vaccine with no adverse effects. Dr. Moore’s statement feeds vaccine hesitancy. As the province's top doctor he should be fighting that not feeding it,” Del Duca wrote.

About 47 per cent of children aged five to 11 have received at least their first dose of COVID-19 vaccine in Ontario, which is among the lowest rates in Canada.

During the earlier press conference, Moore said that he would like to see “a higher uptake” among the age cohort but he noted that parents are concerned “that’s it’s a new vaccine” and have also expressed concerns about “potential side effects,” including relatively rare instances of myocarditis.

Moore did go on to say that he “strongly believes” in the benefits of vaccination for the age group but he was still criticized for his initial remarks, including by Del Duca.

“I want to be clear that the paediatric Pfizer vaccine for children five to 11 is safe, effective, and provides strong protection against COVID-19 and variants,” he said in a statement issued later on Wednesday afternoon clarifying his remarks. “We know that some parents may have questions before getting their child vaccinated. That’s why we are working closely with public health units, children’s hospitals, children’s services and other health experts to ensure parents are supported in getting answers to their questions, including partnering with SickKids to allow for confidential, convenient and accessible vaccine consultation services for children, youth and their families.”

Pfizer’s pediatric vaccine was approved for use by Health Canada in late November.

The vaccine is packaged differently because it uses a reduced dose but is otherwise identical to the vaccine used for those 12 and up.

A study previously released by the U.S. Centers for Disease Control and Prevention (CDC) found that nearly all of the side-effects for the Pfizer- vaccine for children five to 11 years of age have been mild so far.

Injection site pain, fatigue and headaches were the most frequently reported reactions.