Ontario's top health official says daily case counts would have to be 'well below' 1,000 to lift stay-at-home order 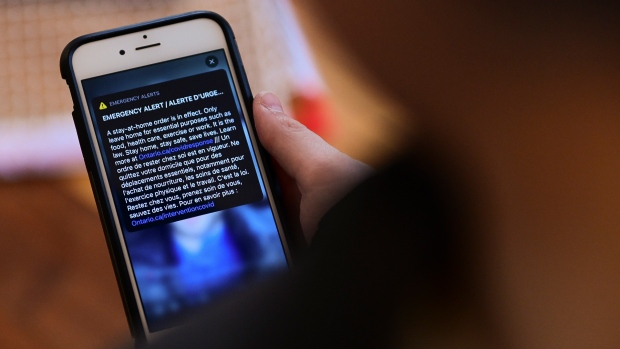 An emergency alert regarding the province's stay-at-home order during the COVID-19 pandemic is viewed on a cell phone in Eastern Ontario on Thursday, Jan. 14, 2021. THE CANADIAN PRESS/Sean Kilpatrick

Ontario’s top public health official says that he would like to see daily case counts fall to “well below 1,000” before the stay-at-home order is lifted, a metric that the province hasn't hit with any regularity since October.

The Ontario government issued a four-week stay at home order back on April 7 but later extended it for another two weeks as the healthcare system came under increased strain and Canadian Forces personnel were deployed at several hospitals dealing with an influx of COVID patients.

The current order is now set to expire on May 19 but during a press conference on Monday afternoon Chief Medical Officer of Health Dr. David Williams seemed to pour cold water on the idea of loosening restrictions in time for the Victoria Day long weekend.

“It think it (case counts) has to be well below 1,000. With the variants it is a new issue, they are much more readily transmitted so we have to be a lot more cautious,” he said. “We don't want to go back up again. We do not want to fourth wave. We don't want to have to close things back down again when we open up.”

Ontario’s rolling seven-day average of new cases hit 4,347 in mid-April but has been steadily declining since then and now stands at 3,017.

That, however, is still more than three times the threshold that Williams has set to lift the stay-at-home order.

The chief medical officer of health also said on Monday that he would like to see the number of COVID patients in intensive care fall from 828 to below 200.

When the province lifted the last stay-at-home order in February, there were still 333 COVID patients in intensive care units and members of Ontario’s science advisory table have said that the decision to lift restrictions when hospitals were still overcrowded contributed to the immense strain faced by Ontario’s hospital during the third wave.

“We are bending the curve, we are coming down off the third wave, but we want to get down from the third wave totally,” Williams said. “We didn't get down the second wave totally before the third wave hit and that has added immense stress on our healthcare system. We don't want to repeat that again so we're going to have to be very careful as we go down to make sure we're well off that and that we are in a state where we can ease off the pressure on the healthcare system and get elective surgeries back.”

William’s comments on Monday afternoon comes as the Ford government continues to mull over the fate of the stay-at-home order after its current expiry on May 19.

Speaking with reporters earlier in the day, Health Minister Christine Elliott refused to confirm whether it will be extended but did say that "we have to stay the course" for the time being.

“Well, we're looking at things daily but what I do know is that we're going to have to see our numbers go down. They're under 3000 (cases) today, which is encouraging, and the numbers in intensive care are at 828. But that's still very high, and we need to see them go down more before we can change the stay-at-home order. The medical experts have been very clear that we need to stay the course.”

Elliott said that members of the government are “actively considering” what the eventual reopening of Ontario’s economy will look like but she said that it is “not time" to put those plans into action right now., given the high number of COVID-19 patients still being treated in hospital.

Meanwhile, as speculation builds around what will happen after May 19 some local politicians are pushing for clarity.

On Monday the mayors and chairs from Greater Toronto and Hamilton Area municipalities released a joint statement asking the province for “predictability” on the current order “and what is to follow.”

“We think it is important that the Ontario government communicate clearly and as soon as possible, whether or not this order will be extended further or modified based on public health advice,” Mayor John Tory told reporters during a briefing at city hall. “This kind of predictability will help people and businesses plan for the near future, and it will help to further manage expectations. I can tell you that we are focused on what comes after this stay at home period whenever it may end, and how we can open up in an orderly and predictable way.”

Tory did not weigh in whether he believes the stay-at-home order should be extended but conceded that people are “anxious” right now on what could come next.

She said that while the city is starting to see “signs for cautious optimism” with its reproductive number back below one even a slight uptick in mobility could cause the decline in case counts to stall.

“I'm of the belief there is little likelihood the facts will change sufficiently by May the 20th when the current order is set to expire (to lift it),” she said.