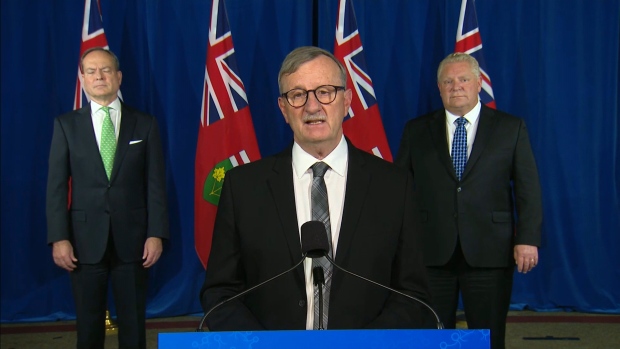 The public health official that has led Ontario’s response to the COVID-19 pandemic has agreed to push back his retirement and remain on the job through most of 2021.

Chief Medical Officer of Health Dr. David Williams was supposed to leave his role in February but in a statement issued on Monday morning Health Minister Christine Elliott revealed that he has agreed to be reappointed to the role for a term that would commence on Feb. 16, 2021 and conclude on Sep. 1, 2021.

In order to be formalized, the reappointment still needs to be approved by a majority of MPPs at Queen’s Park.

“Now more than ever, we need experienced, stable leadership” Elliott said in the statement. “We need someone who fully understands the pandemic and the province’s public health system as we continue to work collectively to stop the spread of COVID-19, and continue the work preparing for the deployment of vaccines. There is no one better suited for the job than Dr. Williams.”

Williams has at times faced criticism for his handling of the pandemic and in September Registered Nurses Association of Ontario CEO Doris Grinspun called for his removal in an interview with the QP briefing, noting that he is “not fit for the job.”

University of Toronto Epidemiologist Dr. David Fisman also made a similar call in April and in September repeated those remarks on Twitter, noting that it was “long past time” for a shakeup.

Williams, however, has enjoyed the support of Premier Doug Ford, who told reporters on Nov. 12 that there was “no light” between him and his top public health official when it comes to how to handle COVID-19.

He also rushed to his defence last week after he faced criticism from medical officials for suggesting that all 34 of Ontario’s public health units could be in the green zone of the colour-coded system for COVID-19 restrictions by Christmas, noting that Williams was just a “glass half full" kind of guy.

“He has brought us all the way through this along with (Associate Medical Officer of Health) Dr. (Barbara) Yaffe and their whole team and I don’t believe in changing your dance partner in the middle of a dance especially when he is an incredible dancer like Dr. Williams,” Ford told reporters at Queen’s Park on Monday afternoon. “He is a great doctor.”

Ford was asked specifically about the criticism that Williams has faced from some leaders in the medical community on Monday afternoon and replied that it is “easy to criticize when you aren’t deep, deep into it.”

He said that Williams has had to make “endless decisions day after day” and is “doing a great job” in difficult circumstances.

“The easy thing for Dr. Williams to do would have been to wash your hands and say ‘I don’t need this anymore’ but he is not built that way. He is a man of integrity, a man of honesty and he is passionate about helping the people of Ontario,” he said. “I can assure you that Dr. Williams doesn’t need the few extra dollars from the next seven months, I am sure he would rather be up at a cottage somewhere but this is what this man is made of and I think he is incredible.”

Speaking with reporters during a subsequent briefing later on Monday afternoon, Williams said that agreeing to stay on for a few more months was the “responsible” thing to do in the face of a global pandemic that has sickened more than 100,000 Ontarians.

He said that he expects that senior leaders with the Ministry of Health will continue to look for his successor with that person hopefully inheriting a much better situation by the time he does leave the position later on in 2021.

“Perhaps by the spring and into the summer we may be out of the worst of it with vaccines and I can hand things over in a less tumultuous state to a successor,” he said.