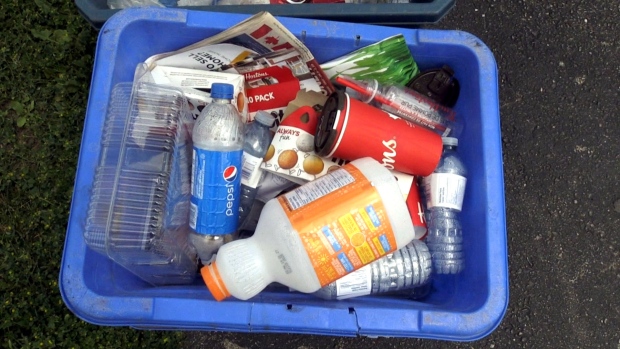 TORONTO - Ontario has finalized its plans to expand the list of items accepted in blue boxes as it moves to standardize recycling programs across the province.

Environment Minister Jeff Yurek announced the government has concluded consultations and will move forward with a plan that has been in development for years.

It will standardize the blue box program across more than 250 municipalities and shift the cost to operate it from communities to waste producers - a move it estimates will save $156 million a year.

Yurek says the program will mean additional items will be accepted in blue boxes including plastic cups, foils, trays and bags.

Single use items such as stir sticks, straws, cutlery and plates will also be permitted in blue bins under the proposal.

The program will be phased in starting in 2023 in Toronto, London, Kenora, and the Town of Hawkesbury.

The province will also expand blue box services to more smaller and rural communities with populations under 5,000.

It is also pledging to expand the service to locations where it is not provided, including apartment buildings, long-term care homes, schools and municipal parks by 2026.

Opposition critics have slammed the government for taking too long to implement the changes, but Yurek defended the timeline as realistic.

“When we looked at creating the blue box program we actually want to make the changes that are going to be effective and actually workable in the real day world,” he said. “Not just what's thought about on a piece of paper.”

Yurek said Ontario's overall waste diversion rate has stalled and about 70 per cent of recyclable materials continue to end up in landfills.

“This will allow more Ontarians to recycle,” he said.

Green party Leader Mike Schreiner praised the initiative for streamlining the province's recycling program, but said if Ontario wants to tackle the issue of plastic waste it needs to ban single-use plastic bottles and coffee cups.

Those items were left off a recent federal list of banned single-use plastics, he said.

“My fear is that Premier (Doug Ford) does not understand that our plastic waste problem is reaching a crisis point,” Schreiner said in a statement. “I am worried that plastics will continue to pile up in landfills, parks, and lakes.”