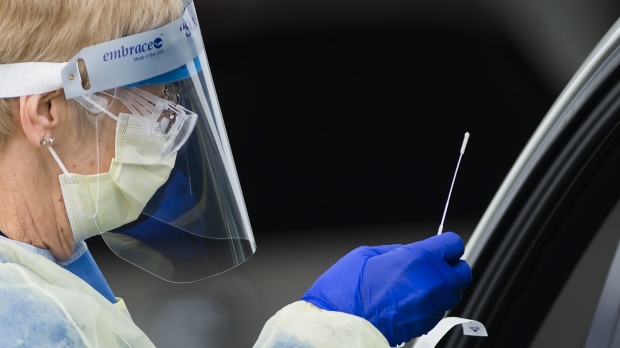 Ontario is reporting 116 new cases of COVID-19 and another seven deaths, marking a return to the lower numbers seen earlier this week.

On Thursday the Ministry of Health reported a recent high of 170 new cases but 86 of those were in the Windsor-Essex area where the province has been conducting targeted testing of temporary farm workers.

Friday’s number marks a return to the lower levels of infection seen earlier this week when there were 118, 112 and 154 new cases reported.

The five-day rolling average of new cases now stands at 134. It stood at 176 at this point last week.

“With 178 more resolved today, Ontario is reporting fewer active cases than seen at any point in April, pre-peak,” Health Minister Christine Elliott said in a message posted to Twitter on Friday morning.

About 70 per cent of the new cases reported on Friday are in the Greater Toronto Area, continuing a recent trend.

However, for a third day in a row Peel had the highest number of new cases in the region (35), exceeding the rate of infection in Toronto (23 new cases) despite having less than half the population.

Meanwhile, half of Ontario’s 34 public health units reported no new cases at all over the last 24 hours.

The only regions to report more than five cases were Toronto, Peel, York and Windsor Essex.

Testing also remains high after a slight decline over the weekend.

On Thursday the province’s labs turned around 27,484 individual tests, pointing to a positive rate of 0.42 per cent.

At one point in April, the province’s positive rate neared seventeen per cent as officials scrambled to ramp up testing efforts.

As for hospitalizations, they remain lower than they have been in months.

On Thursday there were 117 patients hospitalized with COVID-19, including 34 people in intensive care units.

At the height of the pandemic the number of people hospitalized surpassed 1,000 and 264 of them were in the ICU (on April 8).