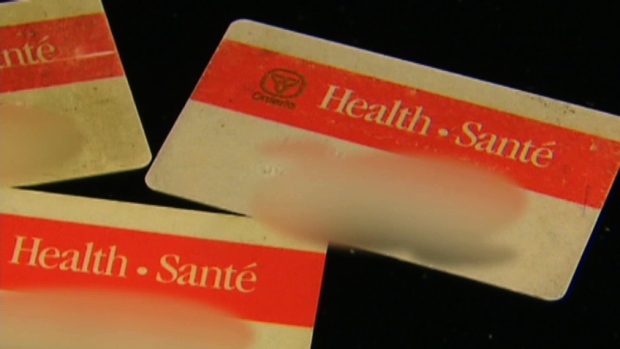 Hundreds of thousands of Ontarians will soon have to say goodbye for good to their old, red-and-white health cards. (File photo)

TORONTO -- Hundreds of thousands of Ontarians will soon have to say goodbye for good to their old, red-and-white health cards.

The Canadian Press has learned the government has set July 1 as the date the cards will no longer be accepted.

It comes more than 25 years after the province first announced those cards would be phased out.

There are still about 300,000 red-and-white health cards in circulation, representing about two per cent of all Ontario health cards.

Health Minister Christine Elliott says those cards are more susceptible to fraud than the newer cards, which feature a photo and a signature.

She says people who still have the old health cards will get notices this month, and after that they will get monthly reminders to get a new card.

"After July 1, the card will not be accepted for services," Elliott said in an interview. "Hospitals, if someone attends with an emergency where they need medical attention right away, of course they won't be denied care, but they will be receiving the hospital bill for those services."

Anyone who has to pay up front for doctor's office or hospital services will be reimbursed once they get a new health card, Elliott said.

Photo health cards can be obtained for free at ServiceOntario locations.

The province is also going to ask doctor's offices, hospitals and pharmacists to remind anyone using a red-and-white health card about the imminent need to switch to a new one.

It was late 1994 when the then-NDP government announced that due to fraud and misuse, the cards -- which were introduced just four years prior -- would be phased out over three years.

When the photo ID cards were first announced in 1995, the government estimated the red-and-white cards were being used for $65 million in fraudulent claims a year. At the time, Ontario's health cards had the least amount of printed information of any province, including only a name and no expiry date, according to a 2006 auditor general report.

There were about 300,000 more health cards in circulation than there were people in Ontario, the auditor said.

In the years before the photo ID cards were introduced, health officials warned that some cards had fallen into the hands of Americans and other non-residents, with fraudulent use the most prevalent in Ontario's border communities.

This report by The Canadian Press was first published Jan. 9, 2020.