Ontario students are up to 3 months behind in their learning due to COVID-19 lockdowns: Science Table 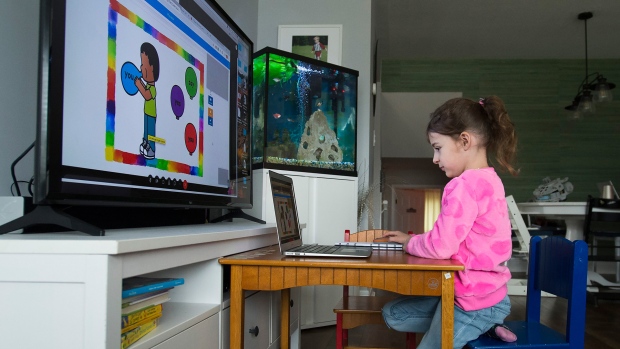 Six-year-old Peyton Denette works on her speech and language skills with speech-language pathologist Olivia Chiu of Two Can Talk remotely from her home in Mississauga, Ont., on Monday, March 30, 2020. THE CANADIAN PRESS/Nathan Denette

Ontario public school students are likely two to three months behind in their learning because of school closures brought on by COVID-19, leading to life-long losses in their expected earnings as adults if efforts aren’t made to bring them up to speed, says a new analysis by the COVID-19 Science Table.

Citing research from the U.S., Holland and the UK, epidemiologists advising the Ontario government say that pupils are anywhere from 1.6 to 3.3 months behind where they would have been academically if in-person learning was not shut because of COVID-19 starting last March.

“While there are numerous differences in how studies measure the impact of COVID-19-related disruptions on learning (i.e., standard deviations, months behind, scaled points behind, percentages of students not at grade level), most point to average achievement that was well behind that of earlier cohorts, measured at the same point in preceding school year(s),” authors wrote in a brief published on Monday. 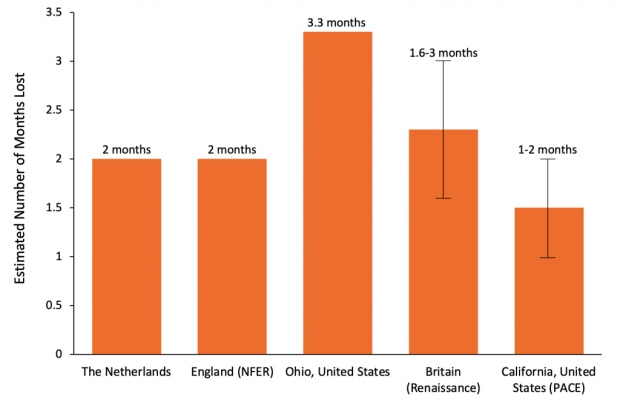 The authors found that virtual learning led to increased absenteeism, unexplained declines in overall school enrolment and sustained declines in the amount of time pupils report devoting to completing homework.

The learning gaps are less pronounced at younger grades but increase among older students.

The impact of the declines, called skill loss, unaddressed, could cost the Canadian economy for decades.

“Each month of skill loss is predicted to cause a one per cent drop in lifetime earnings for affected cohorts and is estimated to decrease the national income by 0.5 percent per year, which would translate to a GDP loss for Canada of 1.6 trillion,” authors wrote in the brief.

As of May 15, Ontario elementary and secondary schools were for 20 weeks, the longest of any school system in Canada, with the length of that closure set to extend to 26 weeks by the end of June. 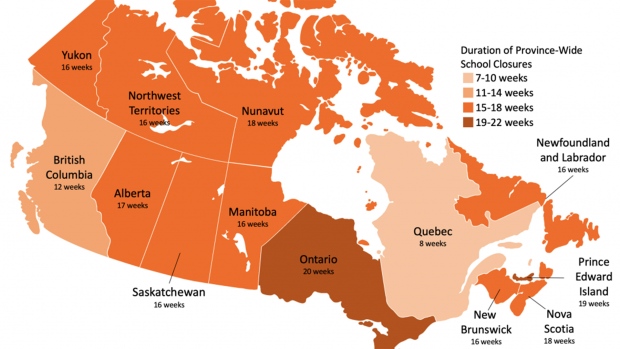 Last week, Ontario Premier Doug Ford said schools would not resume in-person instruction in June, as their in-person operations could increase COVID-19 transmission, spread of the new Delta variant, and jeopardize plans to reopen the rest of the economy.

The decision also signalled a reversal from claims made often earlier in the year by Education Minister Stephen Lecce, who said schools were not a significant source of COVID-19 transmission and merely amplified spread of the virus already circulating in the community.

The Science Advisory Table says there is a need for additional education funding in the 2021-2022 school year to address and perhaps erase the skill gap caused by online learning.

“There is a need for explicit education recovery strategies to be funded in addition to regular schooling budgets. Strategies may include active measures to ensure appropriate universal responses (overall curriculum adaptations, instruction, and student supports), and targeted intensive accelerated learning programs for groups that have been most disadvantaged by health and education effects of COVID-19.”

A ministry of education official said the province plans to spend $85.5 million this school year on targeted efforts to bring students’ reading, writing and numeracy back on track, as well as $62 million for summer school.

The province will also continue to offer virtual tutoring through the TVO platform.

“We just announced the largest investment in public education in Ontario history — in addition to a $1.6 billion plan to protect the safety of children and a $85 million plan to help them recover from learning loss with a focus on mental health, math and reading supports,” Ministry of Education spokesperson Caitlin Clark told CP24. “It also includes the largest summer learning program in Ontario history and includes access to tutors — including math educators — for children in both English and French.”