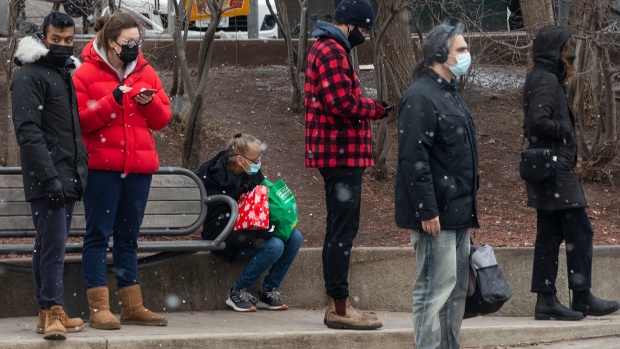 People wait in line for a walk in PCR COVID-19 test site in Toronto on Wednesday December 22, 2021. Many had been in the queue for over two hours, as Ontario's Chief Medical Officer stated yesterday that the province may soon have to put some limitations on PCR testing to respond to outbreaks and protect long-term care facilities. THE CANADIAN PRESS/Chris Young

Ontario will announce changes to its official COVID-19 testing guidance sometime this week, as the surge in cases driven by the Omicron variant has made getting a test next to impossible.

People with symptoms consistent with COVID-19 faced long lineups and in some places a complete lack of available appointments for PCR testing over the last several days, as Ontario is now routinely reporting 9,000 to 10,000 cases per day.

Prior to the holidays, Chief Medical Officer Dr. Kieran Moore said that public health units would no longer be contact tracing cases outside of high-risk settings such as congregate care or hospitals.

Labs were able to process between 60,000 to 70,000 samples per day prior to the holidays, with up to 19 per cent of them coming back positive, a clear sign that infections are going undetected.

Public Health Ontario says that infection data should now be interpreted with caution as it is a significant undercount of the actual amount of infection occurring in the province.

At Women’s College Hospital, Michael Garron Hospital, Sunnybook Health Sciences Centre, North York General Hospital and Toronto Western Hospital on Tuesday, the soonest any of them had an opening for a COVID-19 test was January 8.

Moore had a new conference scheduled for Tuesday afternoon, but it was postponed.

The Ministry of Health said it was reviewing a new policy from the U.S. Centers for Disease Control, which states that anyone with confirmed or probable COVID-19 should isolate at home for five days, down from ten, so long as they do not show symptoms.

“In light of the recently updated guidance from the Centers for Disease Control and Prevention on shortening the recommended isolation and quarantine period, the Office of the Chief Medical Officer of Health and Public Health Ontario are evaluating this guidance against Ontario-specific evidence,” spokesperson Alexandra Hilkene told CP24.“Dr. Moore will provide an update later this week.” 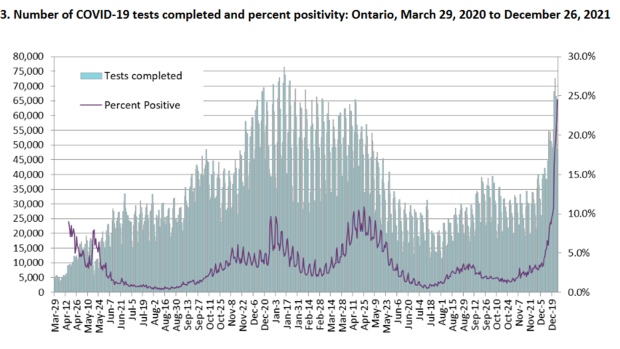 People with positive results from rapid antigen tests done at home or at a pharmacy have little chance of their infection being documented.

In other public health units such as Ottawa, there is no requirement or mechanism to report a positive rapid antigen result.

Anyone with symptoms, contact with a previously confirmed case or those identified as part of an outbreak investigation is currently eligible for a free PCR test at a hospital assessment centre or pharmacy.

The province last narrowed the testing guidance in October 2020. Prior to that, anyone could get a free COVID-19 test with or without symptoms, and some even received free testing to satisfy travel requirements.