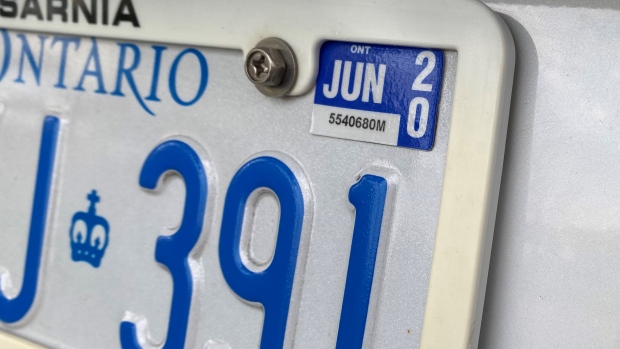 An Ontario licence plate is seen in this undated image.

Paper renewal notices for driver’s licences, licence plate stickers, and health cards in Ontario will soon be a thing of the past.

The Ministry of Government and Consumer Services confirmed that residents with the aforementioned documents that are set to expire on or after March 1, 2022 will no longer be mailed paper renewal notices and will instead receive digital reminders.

“Our government is taking another big step in our digital first approach by shifting away from snail mail to a modern alternative, saving taxpayer dollars and eliminating excess paper waste,” Minister of Government and Consumer Services Ross Romano said in a news release obtained by CTV News Toronto.

The move will save up to $29 million over five years in postage and mailing costs, money the government said will be used to reinvest in education.

Some 80 million pieces of paper will also be spared in the process, according to the ministry.

Those eligible for the digital reminders can sign up here to receive an email, text, phone call, or combination of the three when their licence plate sticker, driver’s licence or health card is about to expire.

Those reminders will be sent at zero cost 60 days and 30 days before the expiry date.

Residents can also get the reminders by automated voice calls or text messages by calling toll free at 1-800-267-8097.

The announcement builds on one made by the government back on July 21, when the government introduced the option for Ontarians to receive digital reminders in advance of their renewal date. Since then, nearly one million Ontarians have signed up.

Any resident with a driver’s licence, licence plate sticker, or health card that expired on or after March 1, of last year -- which was not renewed due to the temporary extensions that were issued at the height of the COVID-19 pandemic -- will receive a final letter in the mail letting them know it’s time to renew.

There are exceptions to the new initiative and some residents can expect to still receive renewal notices in the mail if their government-issued products expire on or after March 1, 2022.

EXEMPTIONS FOR DRIVER’S LICENCE HOLDERS AND VEHICLE OWNERS INCLUDE:

EXEMPTIONS FOR HEALTH CARD HOLDERS INCLUDE: