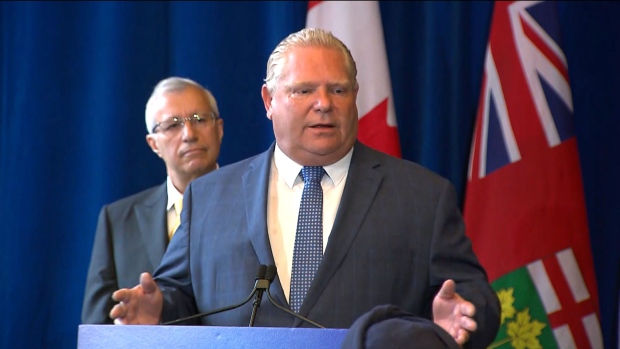 TORONTO -- Ontario's emissions testing program for older passenger vehicles will be dismantled next year and replaced with a new system that will focus on heavy-duty vehicles such as transport trucks, the government said Friday.

The Progressive Conservative government said the Drive Clean program, which involves a mandatory emissions test every two years for cars and light-duty trucks over seven years old, is outdated and no longer effective.

In a news conference Friday, Premier Doug Ford said the program worked well when it was introduced in 1999 and but grew less useful as the automotive industry adopted more stringent emissions standards.

"Drive Clean was created almost 20 years ago but 20 years later, the family car now creates much less pollution. So Drive Clean has outlived its usefulness," he said.

Only five per cent of vehicles failed the test last year, compared with 16 per cent in 1999, and the trend is expected to continue, the government said.

The Tories said a new program will be introduced to target emissions from heavy-duty vehicles, which they say have weaker emissions standards and get replaced less frequently.

"With the light-duty vehicle program gone, we will be able to better focus ... on the biggest polluters on the road: transport trucks and other heavy-duty vehicles," Environment Minister Rod Phillips said.

"More vehicles will be tested and almost twice as many polluting vehicles will be repaired. This means tougher on-road inspections, stronger enforcement that will ensure owners are accountable and properly maintaining their vehicle's emissions."

The government said the proposed changes will be subject to a 30-day public consultation, and are scheduled to take effect on April 1, 2019. It further said the move is expected to save the province $40 million each year.

The previous Liberal government made the test free last year and proposed a pilot project that would allow the test to be carried out remotely through on-board diagnostics.

Drive Clean has previously come under fire for amassing multimillion-dollar surpluses, even though it was supposed to be a revenue neutral program. Ontario's former auditor general warned in 2012 that could land the province in legal trouble, because it's a user fee, not a tax.

Friday's announcement was met with praise by some in the automotive industry and questions from some political opponents.

"Ontario is now in the mainstream, becoming the last province to eliminate their mandatory vehicle emissions program," said Frank Notte of the Trillium Automobile Dealers Association, which represents more than 1,000 new car dealers in Ontario.

"No longer will auto dealers waste money on equipment and overhead costs, freeing up money to invest in their business."

Green Party Leader Mike Schreiner said that while he can accept that the program is no longer as relevant as it once was, scrapping it is part of a pattern for this government.

"When you look at the list of things this government has done on the environment file, all you see are cuts. They have axed pollution pricing, clean energy contracts, energy retrofits and (electric vehicle) rebates, in addition to repealing climate change laws," he said.

"The cancellation of Drive Clean might have little impact one way or another. But it is part of a larger trend of ideologically driven decisions that are out of touch with the future of clean jobs and prosperity."