OP-ED: The growing need for Tasers in Toronto 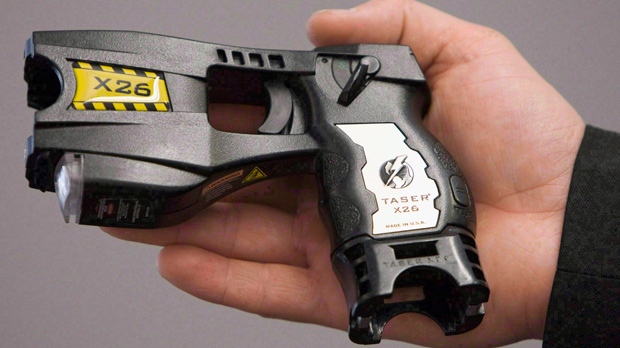 A police-issued Taser gun is displayed. (The Canadian Press/Jonathan Hayward)

I hope that the trial of Toronto Police Constable James Forcillo sufficiently re-ignites the City of Toronto and Toronto Police Services Board debate on the need to equip all front line officers with Conducted Energy Weapons (CEWs).

(Note: They are often referred to as “Tasers”, given that Taser International is the predominant manufacturer and supplier of these devices to law enforcement agencies across North America and beyond.)

When these incapacitating devices were approved by the Ontario government for use by police services, the regulation only allowed for them to be carried by police supervisors and tactical team members – like Toronto Emergency Task Force ETF). That situation was challenging enough in a large municipality like Toronto where the supervisor or ETF members may be several blocks away from the unfolding situation requiring it, but you can imagine how deployed organizations like the OPP dealt with often having to wait an hour or more in remote locations.

Since those days, Ontario amended the regulation following significant pressure from all police chiefs and police associations, allowing for all officers in this province to carry a CEW while on duty. No new funding came with that announcement, so police services had to find the money required from within their already lean budgets (borrow from Peter to pay Paul scenario) or convince their municipal leaders to approve additional funds.

This was a costly venture all around. It has been very difficult for most police services. However, for the Toronto Police, in Canada’s largest city – with the largest and likely busiest municipal police service, it has been a nightmare.

But from a liability perspective, the potential cost of NOT supplying all officers with these “less lethal” devices is hard to even fathom.

They ARE approved for use and most or all police services have equipped all their personnel or are on the road to that end. They ARE on the Ontario Use of Force Continuum. What is the cost of one death of a citizen at the hands of a police officer who had no recourse but to use deadly force (firearm) in a situation that a CEW would have sufficed?

What is the cost to the family of the deceased? The financial impacts of inevitable civil suits? Special Investigations Unit probes? The cost of any subsequent court processes? And what is the impact on an officer who had to use a firearm to protect a life, ultimately taking the life of a suspect who might have otherwise been saved through the use of a CEW?

As I continue to preach: no officer goes to work hoping to take a life. But when he or she does, there is no end to the investigative and legal processes; feelings of isolation; second-guessing; feelings of guilt; sadness; in many cases some form of operational Stress Injury like PTSD – and horrendous impacts on their family.

I recall instances during my tenure as Commissioner, where OPP officers were forced to take lives of suspects through the use of a firearm, where if a CEW had been available, the suspect would have been exposed to a few seconds of electrical impulses, temporary immobilization, and then would be handcuffed and placed healthy and safely into a police car then cell block.

One case in particular sticks out in my mind, where 2 Constables were dealing a man who was suffering from a mental health issue, and he had grabbed a butcher knife while they spoke to the man in his residence. The officers did not have a CEW and their supervisor was miles away.

The officers kept their guns trained on the suspect , keeping the kitchen table between him and them while they tried to de-escalate the situation. If they’d had a CEW it would have all ended safely in several seconds. But sadly, the suspect was determined and started throwing knives at them like a circus performer. He was then justifiably shot and killed.

I am also aware of cases around Ontario where CEWs were at the scene and suspects threatening officers with knives, tools or other potentially dangerous objects and were successfully taken under control through the use of a CEW. In most of those cases, had a CEW not been on scene and officers been without an effective distance and/or physical barrier between them and the suspect, they would have been completely justified to use their firearm. Then the stressful and lengthy process described above would have kicked in and the involved officers lives quite likely forever changed.

Yes, the reality is that there will eventually be another case somewhere, where the application of the CEW will contribute to the death of a suspect, because of some other known or unknown pre-existing medical condition. But let’s be frank…the alternative of having a police bullet pass through the suspects abdomen won’t likely be a good day for him either. I know if I had a choice, I’d gamble that being on the receiving end of the CEW is the more palatable option.

And then, the other unfortunate reality is that, despite the best policies, training, intentions and CEWs on scene, there will be times when the use of deadly force against an individual who is attacking an officer or citizen with a knife – is the only option for police. That may occur very quickly, or several minutes into the occurrence, depending on the actions of the suspect.

The powers that be in the city of Toronto need to get with the program. CEWs need to be acquired, issued (with the proper training and policies) as soon as possible – to ALL TPS officers.

It’s the right thing to do from a variety of perspectives, but especially for the well-being of the officers and for those they are sworn to serve.