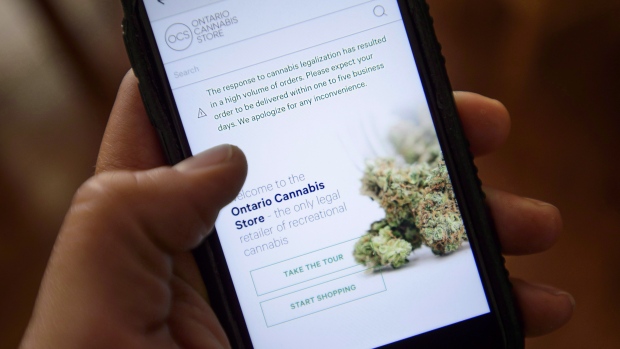 In this file photo, the Ontario Cannabis Store website is pictured on a mobile phone in Ottawa on October 18, 2018. THE CANADIAN PRESS/Sean Kilpatrick

The Ontario Cannabis Store (OCS) says police have been called in to investigate after some of its data was improperly used.

The provincial cannabis wholesaler would not go into detail, but said in an email to CP24 Tuesday night that there was no cyber attack involved in the incident.

“This data was misappropriated, it was not a failure of our IT systems or security,” OCS spokesperson Daffyd Roderick said in a statement. “As this is a criminal matter under investigation by the OPP, we cannot comment further.”

The provincially owned OCS is responsible for selling cannabis products directly to the public through its website, as well as supplying licensed cannabis retailers with their products.

The retailer did not say exactly what information had been misappropriated or who is believed to have taken it.

However the OCS described the incident in a recent letter sent out to retailers, a copy of which was obtained by The Canadian Press.

According to the letter, the data was disclosed and distributed outside of the organization unlawfully and without permission. It included confidential store sales data that was being circulated within the industry.

The OCS has since restricted access to internal reports, the letter said.