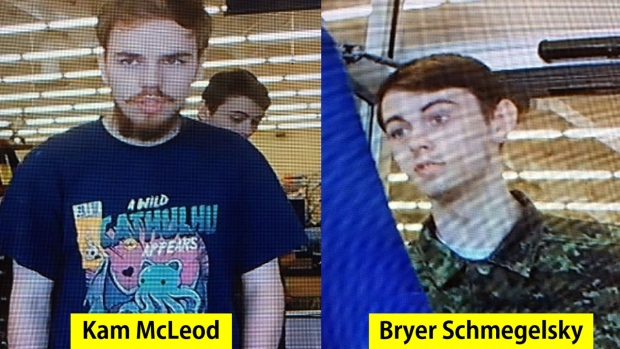 Kam McLeod, 19, and Bryer Schmegelsky, 18, are pictured in a combination handout photo released by RCMP in B.C. (Handout)

Ontario Provincial Police have issued a public safety alert amid concerns that two suspects in the murder of a young couple and an unknown man in British Columbia could be headed in an “easterly direction.”

The alert was issued on Wednesday, less than 24 hours after police confirmed that Kam McLeod, 19, and Bryer Schmegelsky, 18, were being sought in connection with the fatal shooting of a tourist couple in northern B.C. last week, as well as the death of a man -- identified Wednesday as Leonard Dyck of Vancouver --  who was found in a burned-out truck days later.

A Canada-wide warrant was issued for both teens Wednesday night, with RCMP saying they have now been charged with second-degree murder in Dyck's death.

Authorities have said that McLeod and Schmegelsky were seen in Meadow Lake, Saskatchewan on Sunday and on Wednesday RCMP in Manitoba confirmed that a burned out vehicle belonging to the suspects was located earlier this week in the town of Gillam, which is about 1,000 kilometres north of Winnipeg.

“With respect to public safety, we understand the concerns being raised. This is a complex, ongoing investigation, involving multiple jurisdictions. We are engaged with police across Canada. We are investigating all tips and are continuing to ask for the public’s assistance, ” Corporal Julie Courchaine said.

The public safety alert notes that both McLeod and Schmegelsky should be considered dangerous.

“If you see them, do not approach them and any person with information regarding this missing person investigation should immediately contact 911 or the Ontario Provincial Police at 1 (888) 310-1122,” it states.