OPP launch criminal probe after drivers block off stretch of Hwy. 409 to do stunts 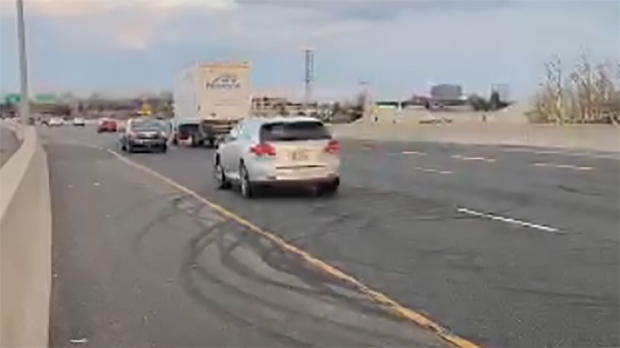 Tire marks are seen on a stretch of Highway 409 near Pearson Airport where a group of motorists performed stunts over the weekend. (@OPP_HSD /Twitter)

Ontario Provincial Police have launched a formal criminal investigation into a highway stunt that they say could have resulted in the deaths of innocent people.

Video of the incident emerged Monday and was shared by the OPP. It shows a group of motorists blocking off an eastbound stretch of Highway 409 near Highway 427 as one of the vehicles performs stunts,  driving around in circles and doing ‘donuts’ on the multi-lane highway. A group of people watching the stunts are seen cheering and recording with their phones.

OPP say the incident happened sometime over the weekend on the busy highway, not far from Pearson International Airport.

On Monday police slammed the stunt as “dangerous” and “ridiculous.”

“This past weekend Highway 409 became the scene of some chaos,” Schmidt said in a post to social media. “Drivers thought it suitable to hijack the highway, shut down the roads without any warning and start performing stunts on the highway.”

Speaking from the scene, Schmidt pointed out tire marks on the roadway consistent with the stunts.

He said the stretch of highway rests at a “blind curve” where it would have been difficult for traffic coming around the corner to see stopped vehicles ahead and added that someone could easily have died as a result of the stunt.

“This is absolutely ridiculous. I can tell you right now that the OPP have launched a criminal investigation into the perpetrators, the organizers and the participants in this activity,” Schmidt said.

He said anyone with information is being asked to contact police.