OPP looking into complaints made against Ford government over Greenbelt development 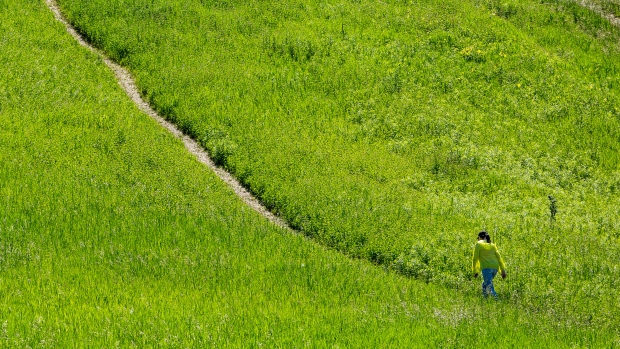 A hiker starts on a high graded hill climb at the Rouge Urban National Park, in Toronto on June 15, 2021. Ontario is proposing to remove land from the Greenbelt, an area created to protect environmentally sensitive lands from development, in order to build at least 50,000 new homes, while adding new land to it elsewhere. THE CANADIAN PRESS/Giordano Ciampini

Ontario Provincial Police are continuing to look into complaints made against the Doug Ford government regarding its plans to develop the Greenbelt in order to determine if it warrants a full blown investigation.

The provincial police’s anti-rackets branch has been poking around since mid-December. It has yet to determine if there is any evidence to support an investigation.

The request for an investigation was made on Dec. 14 by advocacy groups Environmental Defence and Democracy Watch, and was widely supported by the Ontario Liberal Party.

They claim that developers were tipped off on the province’s plans to remove about 7,400 acres from 15 sites within the Greenbelt in order to accommodate the building of more homes.

"It defies any reason the people doing these transactions didn't know the land was going to be opened up. So it's up to the OPP to find out how they knew,” Ontario Environment Program Manager for Environmental Defence Phil Pothen told CTV News Toronto.

“If the minister is saying that it wasn’t him, that’s fine. We need to find out who it was.”

Multiple large developers have purchased Greenbelt land since the Ford government was elected in 2018. This includes an investment made as late as September of 2022.

Speaking with CTV News Toronto, Pothen said his organization met with provincial police a few weeks ago. He says he can’t provide much information into what was discussed, but that the organization has “provided every support that we can.”

"The OPP asked us not to reveal details of those discussions."

In a statement, the Premier’s Office has said that no one in their government has been contacted by the OPP on this matter and no documents have been requested.

Both Premier Doug Ford and Housing Minister Steve Clark have repeatedly denied tipping off developers, saying only that they have held “countless consultations” on the matter.

“I'm the housing minister. I meet with people who want to build housing, whether they’re Habitat for Humanity, whether they're Ontario Aboriginal Housing Services, whether they're a private home builder that builds one home a year or 1,000 homes. That's what I do,” Clark said at the end of November.

“I followed all of the rules that our government has put forward for posting. I didn't hide the posting. I was honest, open and transparent.”

Clark’s response has not quelled the opposition’s desire to get answers. Multiple requests have been made to Ontario’s auditor general and integrity commissioner for investigations into the process.

Both offices told CTV News Toronto that the requests are still under consideration or review.

Part of the requests relate to whether Ford or Clark breached Section 2 or Section 3 of the Members Integrity Act.

Section 2 covers conflict of interest and ensures that a member of the Legislature does not knowingly make a decision that could further their own private interests or those of another individual. Section 3 prohibits a member from providing insider information that is not publicly available for private gain.

The NDP also requested a “value-for-money audit investigating how much wealth would be increased for property owners when their lands are removed from the Greenbelt, thereby enabling profitable rezoning, and whether this wealth transfer is in the public interest.”