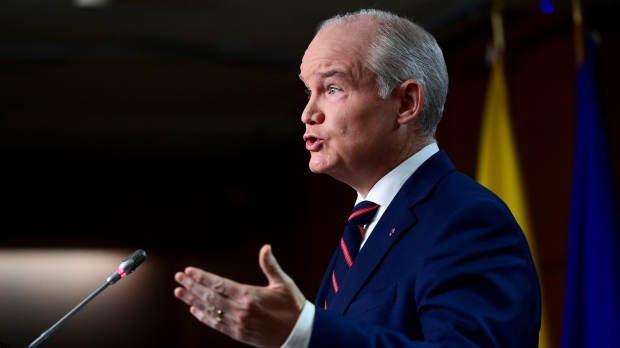 OTTAWA - Opposition parties are up in arms after a parliamentary committee meeting in which members were planning to continue debating whether to call Prime Minister Justin Trudeau's chief of staff, Katie Telford, to testify was cancelled without notice.

The news from the House of Commons defence committee came shortly after Conservative Leader Erin O'Toole demanded Trudeau fire Telford over how the Prime Minister's Office handled an allegation of sexual misconduct against general Jonathan Vance.

“Ms. Telford, it appears, set up a system to hide this from the prime minister and to make sure nothing was done,” O'Toole said Monday in reference to Trudeau's past assertion that he did not know a complaint had been raised against Vance three years ago.

“That is completely unacceptable.”

Telford has been in the limelight since one of Trudeau's former advisers, Elder Marques, suggested to the committee last month that Trudeau's top aide was previously aware of the allegation against Vance.

Marques' testimony was the first hint that Telford knew of the allegation immediately after then-military ombudsman Gary Walbourne raised it with Defence Minister Harjit Sajjan three years ago.

Trudeau defended Telford last week even as he told reporters and parliamentarians that no one in his office or Sajjan's office knew the allegation against Vance was of a sexual nature.

Yet Walbourne has testified he first flagged the allegation to Sajjan in March 2018, when Vance was chief of the defence staff, and the Conservatives have highlighted internal government documents suggesting officials in both offices did know.

The specifics of the complaint against Vance have not been publicly confirmed, but Global News has reported that it involved a lewd email he allegedly sent to a service member he significantly outranked in 2012, before he became defence chief.

Vance has not responded to requests for comment, but Global says that he has denied any inappropriate conduct. He is now being investigated by military police.

The defence committee first started debating on Friday whether to call Telford to answer questions about the government's handling of the allegation, but the meeting was suspended without a resolution after Liberal members talked out the clock.

Opposition members had planned to resume that debate on Monday morning, but were sent a notice shortly before the meeting was due to start that it had been cancelled.

“The Liberals have shown how far they will go to continue this coverup and stop Canadians from learning the truth,” Bezan said in a statement.

“It's clear that the Liberals are more interested in protecting Katie Telford than the women and men in the Canadian Armed Forces.”

McCrimmon did not immediately respond to requests for comment.

Asked to confirm that McCrimmon cancelled the meeting, committee clerk Wassim Bouanani said in an email: “It is the chair's prerogative to call or cancel a meeting.”

“All that we got was a last-minute notice that the meeting was cancelled with no explanation,” he said. “And no timeline for resuming. The official website still says Friday's meeting is suspended and doesn't say anything else about that.”

O'Toole, meanwhile, said his party will ask the House of Commons on Tuesday to support a motion calling on Trudeau to fire Telford over the Vance affair.

While opposition parties have more seats in the House than the Liberals, meaning it could pass, such motions are symbolic and are not binding on the government.

Even then, Garrison said the NDP will not support the Conservative motion, saying: “It's the prime minister and the minister who need to be held responsible here, not one of the only women who was involved.”

Telford has served as Trudeau's most senior staffer since forming government in 2015. The prime minister lost another trusted adviser, Gerald Butts, after the latter resigned during the SNC-Lavalin affair in February 2019.