Over 2,000 Lexus RX Series SUVs were stolen in Ontario last year. These are the other most stolen vehicles

Ontario’s most stolen vehicles in 2021 were named, and SUVs are the most sought-after in car thefts.

Équité Association, an organization with the goal of reducing crime and insurance fraud, released its list of the top 10 most stolen vehicles in Ontario and across Canada.

“The metropolitan areas of Toronto and Montreal are rich hunting grounds for organized auto theft crime rings that funnel stolen vehicles overseas to sell for profit,” a news release reads.

“With Canada becoming a source country for the lucrative export trade in stolen vehicles, the Honda CR-V tops this year’s list.”

In October, the Toronto Police Service (TPS) held a news conference highlighting the dramatic rise in carjackings in the city, with 182 incidents that have happened so far.

Insp. Rich Harris of the TPS Hold Up Squad noted carjackings have been targeting high-end and average vehicles for criminal activity or resale purposes.

Even though Honda CR-V was Canada’s most stolen vehicle with 4,117 thefts across the country, the Lexus RX series had a higher chance of getting stolen in Ontario.

Across the province, 2,083 Lexus RX Series SUVs were stolen last year, which is roughly twice the number of stolen Honda CR-Vs with 1,150 reported thefts. 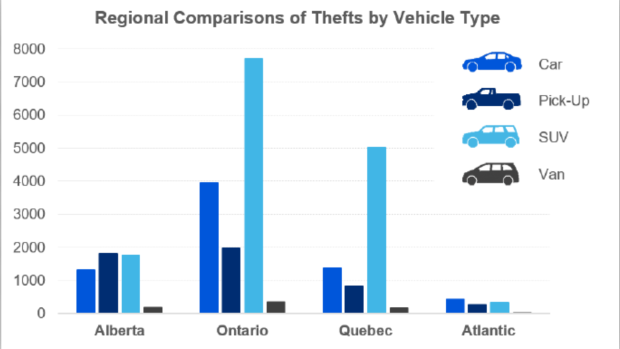 These are the top 10 most stolen vehicles – including the make, model, and vehicle type – last year in Ontario:

RCMP Investigator Maxime Deschenes looks at a stolen Lexus that was seized from a container at a news conference Thursday, July 17, 2014 in Montreal. THE CANADIAN PRESS/Ryan Remiorz