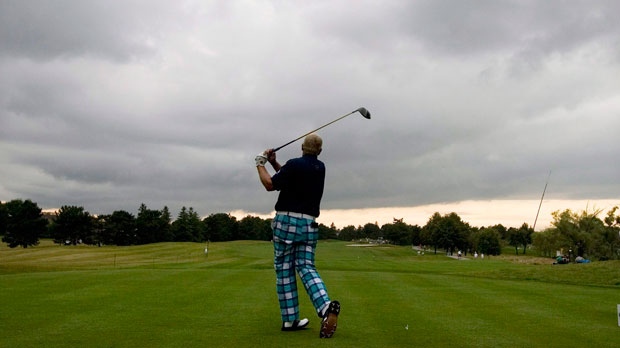 Under a stormy sky, golfer John Daly watches his tee shot on the fifth hole during the first round of the Canadian Open Golf championship at the Glen Abbey Golf Club in Oakville, Ontario on Thursday, July 23, 2009. (The Canadian Press/Darren Calabrese)

The owner of Glen Abbey golf course has filed an appeal to the Ontario Municipal Board after the Oakville town council voted unanimously against a plan to redevelop the area with residential units, retail and office spaces.

ClubLink, the owner of the golf course, issued a news release on Tuesday stating the appeal following the town council meeting on Aug. 21.

“The appeals of ClubLink’s official plan and zoning by-law amendment applications follow a decision by town council to refuse these applications at its meeting,” the news release said.

ClubLink said they are now also appealing their subdivision application to the OMB.

“Based on the town’s failure to make a decision on that application within the prescribed time period set out in the planning act.”

Both of these appeals will be brought to the OMB before a hearing is held to consider the applications made by ClubLink to redevelop the golf course.

At the town council meeting, a member of the Save Glen Abbey group, Shelli Fisico, told CTV News Toronto the site is a “huge part of the city’s history.”

“It’s been here for about 40 years and we would like it to stay here for the culture and history and traditions of Oakville and for all of Canada,” she said.

Fraser Damoff, also part of the lobbying group, said the community has shown strong support for maintaining the site as a golf course.

“Oakville residents are almost unanimously in support of Glen Abbey golf course being protected,” he said. “I’ve heard very few opinions of people who don’t support that. We talk to them and explain that ‘well if Glen Abbey isn’t heritage, then what is’ and after that they kind of come to their sense and support.”

The 40-year-old golf course that was created by golf great Jack Nicklaus has hosted the Canadian Open 28 times.

But ClubLink has said that Golf Canada is no longer interested in hosting the Canadian Open at Glen Abbey.

“Golf Canada has repeatedly confirmed to both the Town of Oakville and to ClubLink that it is currently searching for a new, permanent home for the Canadian Open, and that Glen Abbey golf club is not one of the canadidate sites,” the company said on Sept. 25. “This year, Glen Abbey fell from 55th to 85th in the Score Golf Top 100 courses in Canada ranking.”

The ClubLink property also owns an estate leased by Golf Canada that houses the Canadian Golf Hall of Fame & Musuem.

Prior to the town council meeting, a spokesperson for Club Link Jane Courtemanche said Oakville’s town council’s next step would be to pass a by-law to designate Glen Abbey as a significant heritage cultural landscape.