P.E.I. woman scrambles to save beloved horse from slaughterhouse 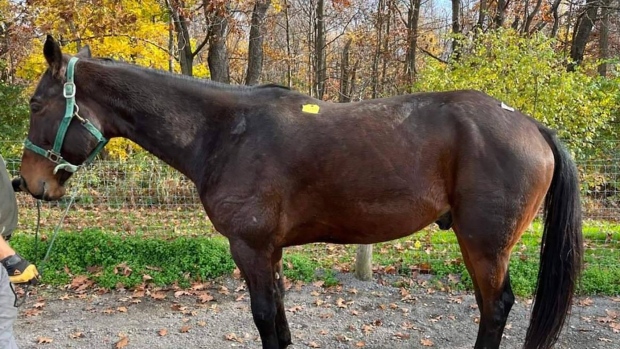 Mittcent Vangogh, an 11-year-old standardbred horse who was sold last year because he had a sore foot is shown in this undated handout photo. Vangogh’s former groomer and owner, Tyra Perry of Tignish, P.E.I., is raising money to rescue the horse from slaughter. THE CANADIAN PRESS/HO-Brooke Leininger

Tyra Perry sat bolt upright in her bed early on Nov. 4. She says her hands shook as she held her phone and read the message: Mittcent Vangogh, the gentle racehorse she had grown to love, was being taken to a slaughterhouse.

"I jumped out of bed. I was very, very upset," Perry, 19, said in an interview this week from her home in Tignish, P.E.I.

Last summer, Perry's family sold the 11-year-old standardbred back to the New Brunswick dealer where they had bought him because he had a sore foot and could no longer race. She imagined the rest of his days would be peaceful. "He's a very big boy," she said. "And he is just the gentlest horse I've ever met."

The family bought the horse in 2019, and Perry and her father took him out to the harness racing track in O'Leary, P.E.I. While her father raced, she was Vangogh's groomer. The horse, she said, usually came in second or third.

But as Vangogh's injury worsened, the family decided to sell him even though Perry was fond of the animal. "My dad said I can’t keep every racehorse that goes through our barn," she said.

After selling Vangogh last year, she lost track of him until a friend messaged after reading news about the animal on a horse-rescue Facebook page. The horse was in Pennsylvania and would be sent to Quebec to be slaughtered for meat.

"I couldn't let him be slaughtered. It broke my heart," Perry said.

Hale said in an interview that she had watched videos sent by a volunteer in Pennsylvania who spotted Vangogh outside the slaughterhouse, and the horse looks "totally fine."

"He's in good shape," Hale said. "You know, there's no reason he should have landed where he was. Just kind of bad luck.”

The first step Perry said she had to take was raise about $1,800 to get Vangogh away from the slaughterhouse.

"Amazingly, I got that in the first week. It was all my friends and family from just my little community," she said. "I raised the $1,800 to get him out as fast as possible. Now he's in a safe home in Pennsylvania."

When she first got the message from Perry asking how her horse could be rescued, Hale said she felt relief.

"Those horses that have people looking out for them and care about them, it's an extra good feeling, knowing that we can help them get them out, rather than the ones that don't have anybody, because those ones are a lot harder," she said.

The U.S. has a ban on equine slaughter, although horsemeat is sold across North America. Canada has two of the biggest slaughterhouses — in Quebec and Alberta.

Hale said Vangogh is in quarantine to make sure he's disease-free.

Perry is hoping to raise about $1,500 more by the time Vangogh is out of quarantine so she can transport him back to P.E.I., where he will live with a friend on his farm in nearby Nail Pond. The friend has a horse, she said, so Vangogh will have a friend.

"If everything goes fine, he'll be here before Christmas," she said. "That'd be a nice Christmas gift for him."