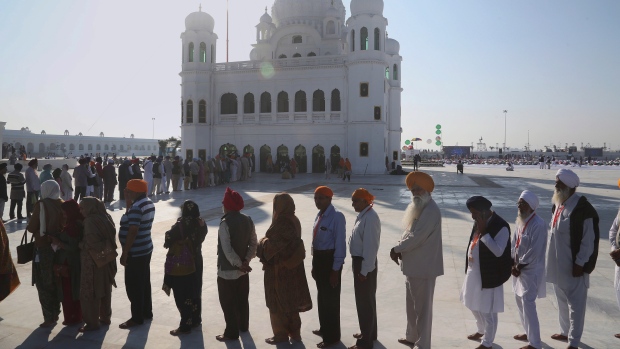 Sikh pilgrims visit the shrine of their spiritual leader Guru Nanak Dev, at Gurdwara Darbar Sahib in Kartarpur, Pakistan. Pakistan's prime minister Imran Khan has inaugurated a visa-free initiative that allows Sikh pilgrims from India to visit one of their holiest shrines. Khan opened the border corridor on Saturday as thousands of Indian pilgrims waited to visit the Kartarpur shrine. (AP Photo/K.M. Chaudary)

KARTARPUR, Pakistan -- The prime ministers of India and Pakistan inaugurated Saturday a visa-free border crossing for Sikh pilgrims from India, allowing thousands of pilgrims to easily visit a Sikh shrine just inside Pakistan each day.

Imran Khanand Narendra Modi held separate opening ceremonies on their respective sides of the new border crossing. It's a rare sign of co-operation between the two nuclear-armed nations amid heightened tensions over the disputed Kashmir region, which both countries partially control but claim in its entirety.

"This is the biggest and happiest day for the Sikh community ... it will help with improving relations" between India and Pakistan, said Manmohan Singh, a former Indian prime minister. He was among the first group of 500 pilgrims to cross using the corridor.

At the opening ceremony, Khan said: "This corridor is the beginning and things will move further toward the improvement in relations between Pakistan and India ... Once the Kashmir issue is resolved it will bring peace to this subcontinent."

The shrine to Guru Nanak, the founder of the Sikh religion, is known as Gurdwara Darbar Sahib. It's the second-holiest place in the Sikh faith and is located on the Ravi River just 4.5 kilometres from Pakistan's border with India.

The new arrangement allows pilgrims to apply online for special permits to visit the shrine. Visas to travel between Pakistan and India are normally difficult to obtain.

Over the past year, Pakistan constructed a huge complex around the shrine with facilities to accommodate 5,000 pilgrims daily, including a vast dining hall, a library and rooms for performing rituals.

Pakistani authorities have called it the biggest Sikh shrine in the world. The religious group makes up only a tiny minority in Muslim-majority Pakistan.

Many Sikh holy sites were left in Pakistan after the British partitioned the subcontinent into separate nations in 1947 following two centuries of colonial rule.