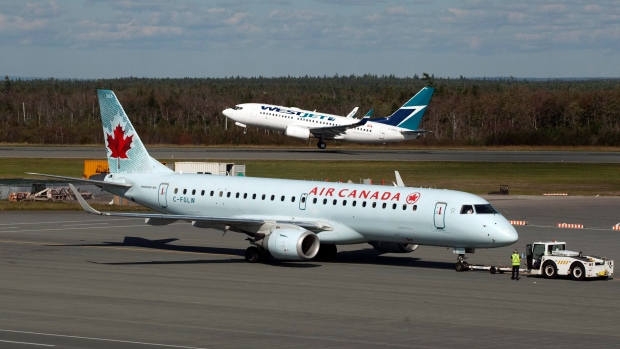 A Westjet aircraft takes off as an Air Canada jet is towed on the tarmac at the Halifax airport on Tuesday, Sept. 20, 2011. A tentative agreement was reached Tuesday afternoon to avert a strike by Air Canada flight attendants. THE CANADIAN PRESS/Andrew Vaughan

CALGARY - Passenger disobedience, rudeness and aggressive behaviour is on the rise and directly impacting the health and well-being of airline employees, according to unions representing flight attendants at the country's major airlines.

“Our people go to work and they anticipate having altercations with our guests on board,” said Chris Rauenbusch, an active cabin crew employee with Calgary-based WestJet Airlines Ltd. and president of the Canadian Union of Public Employees (CUPE) Local 4070. “Some people have mental health conditions and need to take leaves due to these circumstances. It's not what we signed up for as flight attendants, but it's unfortunately become our new reality.”

While reports of increasingly disruptive behaviour in recent months on American flights have prompted calls for U.S. lawmakers to crack down on the problem, data suggests the problem is escalating in Canada as well. Flight attendants say many of the problems stem from passengers who refuse to obey the federal requirement to wear a face mask on board.

“Every time you approach someone you have in your mind that this could be stage one of a seriously escalating situation,” said Troy Winters, senior officer for health and safety with CUPE National. The union represents more than 15,000 flight attendants at nine different Canadian airlines, including WestJet, Air Canada and Transat.

“It's not as bad as it is in the States, there's not as much serious violence, but we certainly do have folks who are overly belligerent.”

According to Transport Canada, incidences of passenger non-compliance with the mask mandate spiked over the summer. Airlines reported 330 passengers to the regulator for refusing to wear a mask during July and August, more than twice the number of incidents reported in April and May.

The rise can be partially attributed to increased passenger volumes as airlines reinstated routes and Canadians began to travel again over the summer. But Winters said he doesn't believe that's the only factor at play. As the pandemic drags on, tempers and anxieties are flaring, and Winters said it doesn't help that different provincial governments have been sending different messages.

“You've got different jurisdictions like Alberta and Saskatchewan, in the summer they declared the pandemic's over and you don't need to wear masks anymore. So folks coming out of those regions are saying 'I don't need to do it,' ” he said.

“It's an issue that's not going away,” Rauenbusch said. “I do anticipate as we get into Thanksgiving and Christmas travel season, we'll see a little more of what we're seeing in the States.”

When airlines report an incident of non-compliance to Transport Canada, the regulator has a range of enforcement measures at its disposal, from letters of warning for first time offences to monetary penalties of up to $5,000. Since September of last year, Transport Canada has levied fines against 36 passengers for failing to wear a mask.

Criminal charges are also possible in the event that a passenger uses abusive language, issues verbal or physical threats towards employees or other passengers, or is otherwise deemed to be “unruly.” Though not all such cases are related to mask wearing or other public health requirements, documented instances of “unruly” passengers on Canadian aircraft have been disproportionately high during the pandemic. There were 73 recorded cases in 2020, only a 25 per cent drop from the year before in spite of the fact that passenger volumes declined by more than 70 per cent.

Flight attendants say the official numbers actually downplay the seriousness of the situation. While Transport Canada asks airlines to report every instance of passengers refusing to wear a mask, Winters said in reality crew members only report the most severe cases.

“It's definitely under-reported,” he said. “Everyone that you have to ask three times to put their mask back on isn't getting written up, because then you'd be writing forms from the time you got off the flight until a couple days later.”

WestJet said it has issued 118 travel bans against passengers for refusing to wear a mask since the airline introduced its “zero tolerance” policy in September of 2020.

“Since January 1, 2021, we have safely flown more than three million guests who are doing an excellent job adhering to the regulations to ensure the safety of all,” said WestJet spokeswoman Morgan Bell in an email. “The total cases of non-compliance represent less than 0.02 per cent of travellers.”

This report by The Canadian Press was first published Sept. 30, 2021.