Pandemic might bring about natural Christmas tree shortage this year 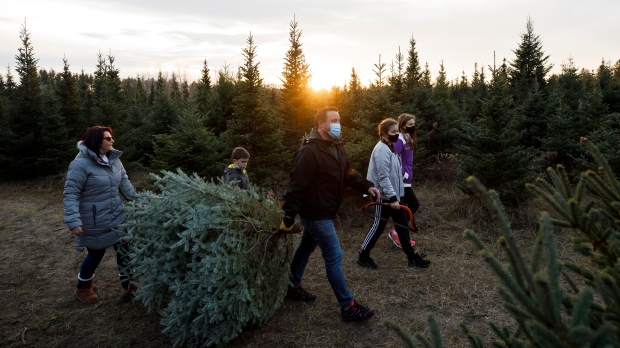 First it was toilet paper, then there was a run on home exercise equipment and now it appears that the COVID-19 pandemic is behind yet another shortage – Christmas trees.

Shirley Brennan, who is the executive director of the Christmas Tree Farmers of Ontario, tells CP24 that demand for tress has increased each of the last five holiday seasons but she says that this year’s jump is particularly pronounced, with fewer residents travelling around the holidays and more viewing a trip to a pick-your-own tree farm as a way to get outside and have some fun amid a myriad of public health restrictions.

“We have seen the sales at Christmas tree farms go up about 25 per cent across the board and we see more and more families just getting out and enjoying not only getting a tree but the fresh air as well,” she said.

It can take upwards of 10 years to grow an average-sized Christmas tree from seed so farmers have not had the ability to simply increase their supply to respond to a surge in pandemic-driven demand.

Brennan said that Fraser firs are a particularly hot item this year and that shoppers are likely to see fewer of them available for sale as we get closer to the holiday season.

But she said that other similar trees, like Douglas firs, will likely continue to be available and are a good substitute.

“Everybody wants the Fraser fir. It has been the tree that most people like because it retains its needles the best and it has soft needles so if you have small kids or that sort of thing (it is better). So that is the one we seem to have (supply) problems with,” she said. “But there are more fir trees out there that Ontario farmers grow and have on their properties. There is Balsam fir, Canaan fir and Douglas fir, so there are lots of trees out there and sometimes it is just a matter of educating the consumers.”

The demand for Christmas trees is already being felt at farms and lots across Canada and the U.S. with many operators saying that they have seen an earlier start to their typical busy season amid the COVID-19 pandemic.

According to the Associated Press, the U.S. state of Oregon alone will ship six million Christmas trees this year with many of them being distributed abroad.

“There is a shortage. A lot of our tress come from the east coast, some Ontario and we are having a hard time getting more. The farmers are saying there is a shortage,” the manger of a tree lot outside the Dufferin Mall told CP24 on Monday morning. “We have always been popular for the trees but much more (this year) since a lot of people are home. It has been a lot earlier sales than usual. Usually December it goes up but it has been busy.”